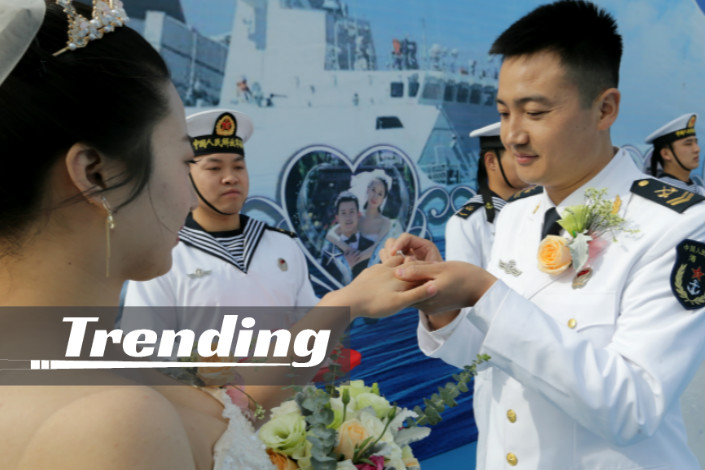 A group wedding ceremony of military personnel and their wives organized by a Chinese naval unit is trending, hitting over 100 million views on Weibo.

A naval aviation brigade of the PLA’s Eastern Theater Command held a group wedding consisting of 15 couples in the presence of their families and comrades in arms. A fighter plane’s gangway was covered by red carpet, and the new couples entered the area that the plane was parked in tractors and boarded the fighter to take their wedding photos.

While the pictures of the group wedding have trended online the story comes as China has seen significant developments in weddings in recent years. According to data from the National Bureau of Statistics and the Ministry of Civil Affairs, China's marriage rate has declined year by year since 2013 and hit a new low in 2019.

The declining marriage rate and the market’s downturn has definitely not dampened netizens’ love for a good wedding. Netizens admired the uniqueness and happiness of this group wedding. “This wedding is way too cool — wish all of you live happily ever after,” read a popular comment.

Some expressed their respect for military wives. “Many girls want to marry soldiers, but it’s not easy to be a military wife. The have less time together than apart; the children and the elderly depend on the wives … I sympathize but respect them.”