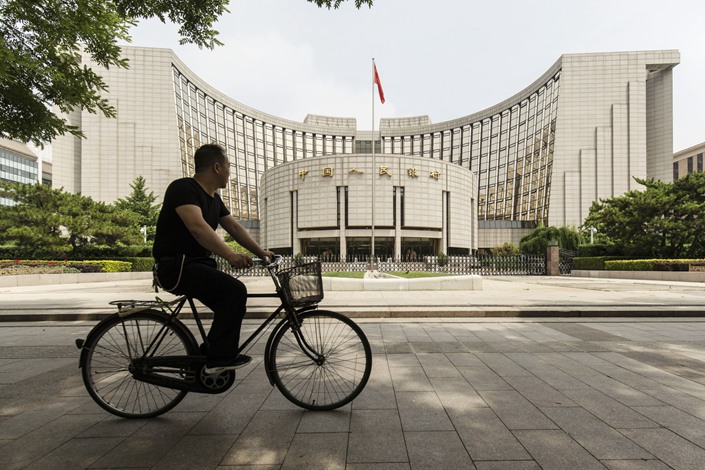 A man rides a bicycle past the People’s Bank of China headquarters in Beijing in June 2019.

(Bloomberg) — China’s central bank is taking steps to restrain the yuan’s rally while stopping short of encouraging declines, a sign that officials are willing to tolerate some currency strength.

After on Saturday scrapping a two-year rule that made it expensive to bet against the yuan, the People’s Bank of China on Monday set its daily reference rate only slightly weaker than analysts expected. While the moves triggered a 0.6% slide in the yuan in early trading, the currency is still up 4.2% in the past three months.

Analysts said the moves will reduce one-way bets on the yuan, slowing a rapid ascent that had pushed it to its strongest since April 2019 versus the dollar. The yuan surged about 1.6% on Friday when the currency traded for the first time this month following National Day holidays, extending its best quarterly advance in 12 years.

“Authorities don’t want the yuan appreciating too quickly,” said Xing Zhaopeng, an economist at Australia and New Zealand Banking Group Ltd. in Shanghai. “But the PBOC also doesn’t want the yuan to depreciate too much. This is a cautious move and will not reverse the trend.”

A recovering economy, a hefty yield premium in sovereign debt over Treasurys and the prospect of a U.S. presidential victory by Democrat nominee Joe Biden are all providing tailwinds for a currency that earlier this year was near its lowest level since 2008.

The People’s Bank of China’s reference rate was fixed at 6.7126 per dollar on Monday, compared with the average estimate of 6.7073 in a Bloomberg survey. The reference rate is decided based a formula that takes into consideration the onshore yuan’s official close at 4:30 p.m. on the previous trading day and major currencies’ moves overnight.

Effective Monday, financial institutions no longer need to set aside cash when purchasing foreign exchange for clients through currency forwards, according to a statement from the PBOC on Saturday. Back in September 2017, when the PBOC similarly cut the cost to zero following sharp gains, the yuan slumped about 2.5% in the next three weeks.

Banks previously had to hold 20% of sales on some foreign exchange forward contracts, a move imposed two years ago when the currency slumped toward 7 per dollar.

The yuan closed on Friday at about 6.69 per dollar, its strongest level since April 2019.