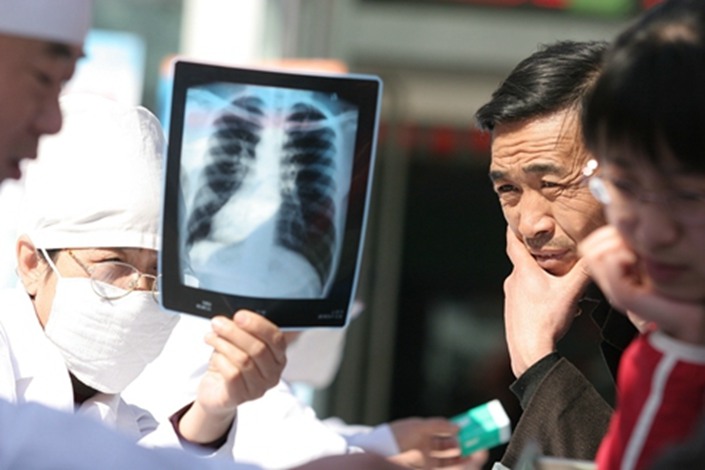 A total of 22 cases of tuberculosis have been discovered among students at Jiangsu Normal University, the university said in a statement late on Wednesday.

Dozens of students at a college in eastern China may have fallen sick with tuberculosis since last summer, according to an official statement released Wednesday.

Jiangsu Normal University (JNU) said 22 students at a campus in the city of Xuzhou have been diagnosed and a further 43 returned “abnormal” test results since August 2019.

But multiple students contacted by Caixin said the outbreak may date back even earlier and criticized university authorities for a lack of transparency.

Tuberculosis is an infectious disease that typically affects the lungs, can spreads from person to person through coughs and sneezes, and can be deadly if left untreated.

The outbreak centers on a campus affiliated with JNU’s College of Arts and Sciences, an independent institution in Xuzhou, a city of 8.5 million people in the eastern Jiangsu province.

Shortly after welcoming students back onto campus in September, the college tested thousands of students, teachers and other staff for tuberculosis, Caixin understands.

Later, the college took the rare step of ordering a smaller number of students and teachers to undergo CT scans, an important diagnostic tool for tuberculosis, at a municipal hospital for infectious diseases.

Tests showed dozens of students, mostly software engineering majors, had chest abnormalities suggestive of the disease, according to Caixin interviews with several students familiar with the matter, all of whom requested anonymity due to the sensitivity of the issue.

All except four of the 43 students with abnormal CT results are currently quarantining at the hospital pending further diagnosis, with the rest isolating in their hometowns, according to the JNU statement.

Several students questioned the timeframe given in the announcement. One third-year software engineering major said several classmates suspended their studies due to tuberculosis infections in 2018, a year earlier than the first diagnosis mentioned in the statement. Caixin was unable to independently verify the claims of any of the students mentioned in this piece.

Claiming to have undergone “about three” tuberculosis screenings since 2018, the student also said some classmates previously continued to attend college even after testing positive for the bacterium that causes the disease.

Other students slammed what they perceived as vague messaging from college authorities. Some said class tutors suddenly ordered them to wear face masks earlier this month, citing the coronavirus pandemic, which has been almost completely suppressed in China. Only when a classmate posted publicly about their tuberculosis diagnosis did people finally “understand the seriousness” of the situation, one student said.

“We came to this school in good health, but now, in the worst cases, we have tuberculosis,” the software engineering student said. “Some of the boys here wanted to become soldiers, but they won’t get that chance now. When you go out looking for jobs, people look at you differently if you have this kind of medical history.”

Neither JNU nor the College of Arts and Sciences responded to Caixin’s requests for comment. In its statement, JNU said it had established a special work group to handle the outbreak, adding that provincial, municipal and district authorities had also sent specialists to provide “standardized disease control guidance.”

China halved the proportion of its population with tuberculosis between 1990 and 2010, but around 866,000 people still contracted it in 2018, according to the World Health Organization. These figures put China’s tuberculosis rate more in line with neighboring countries such as Kazakhstan and Russia, but far behind developed economies such as the United States, where less than 9,000 people caught tuberculosis last year, according to the country’s Centers for Disease Control and Prevention.