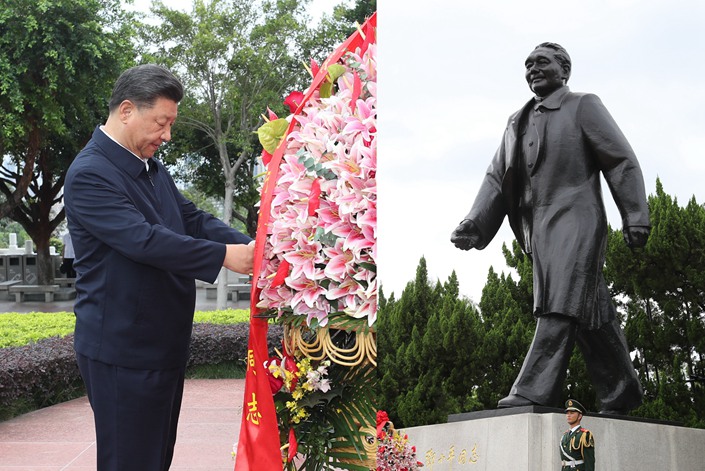 Xi Jinping, general secretary of the Communist Party of China Central Committee, on Wednesday presented a flower basket to the statue of Comrade Deng Xiaoping at Lianhuashan Park in south China's Shenzhen, expressing his deep respect for Deng. Photo: Xinhua

President Xi Jinping urged the city of Shenzhen, China's pioneer of reform and opening-up in the southern Guangdong province, to take the lead in advancing the country's reform agenda with "greater political courage and wisdom" amid “unprecedented challenges” including pressures of global competition for technology and talent.

"The complexity, sensitivity and difficulty of pushing forward reform [in China] are no smaller than four decades ago" when the country decided in 1978 to liberalize its economy and open its doors to foreign investors, Xi said Wednesday at a ceremony celebrating the 40th anniversary of the establishment of the Shenzhen Special Economic Zone.

He said the comparatively developed economy of Shenzhen and Guangdong faces "greater pressure of global competition for technology, talent and others."

"Therefore, we must -- with greater political courage and wisdom -- adhere to the combination of crossing the river by filling the stones and strengthening top-level design," he said, referring to a well-known reform concept, often attributed to former leader Deng Xiaoping, of pioneering through steady steps.

Xi's remarks (link in Chinese) came as questions have been raised on whether the world's second-largest economy could continue its path of reform and opening-up amid the Covid-19 pandemic and U.S. decoupling pressure. The Communist Party Central Committee is to meet Oct. 26–29 to lay out guidelines for the country's next Five-Year Plan for 2025–30.

The Chinese leadership visited Shenzhen as a show of commitment to the reform and opening-up policy. The city is one of four special economic zones established in 1980 in the early stage of China’s shift to reform and opening-up after domestic social unrest in the 1960s and 1970s. It has since been the country’s test bed for policies of market reform and economic liberalization.

"By no means should we be stopped by the reversing trends and tides,” Xi said, without mentioning the Trump administration’s attempts to cut off China from global supply chains, particularly in advanced technologies such as 5G wireless networks and chipsets. “We should choose the right side of history to unswervingly further open up in a comprehensive manner."

Regarding China as a "strategic competitor," the Trump administration has adopted a confrontational approach in response to Beijing's expanding global geopolitical and economic influence, including initiating a trade war over its bilateral trade deficit with China and a global campaign to ban China's telecom giant Huawei from the 5G market.

In response, Beijing initiated a so-called “dual circulation” strategy, an idea first raised by Xi in May, to reduce dependence on foreign markets and technology in the nation’s long-term development. The strategy would be a part of China’s next national Five-Year Plan, raising fears among foreign investors that the country could disengage itself from foreign markets and investors.

"The new development pattern is not a closed domestic cycle, but an open domestic and international dual cycle," Xi said in Shenzhen in response to the concerns about the dual circulation strategy.

"We should optimize and upgrade our production, distribution, circulation and consumption systems," he said. "We should strengthen domestic economic connections, enhance economic intensity, improve and smooth the capabilities of the domestic cycle of circulation, and connect the international and domestic dual cycle."

In the case of Shenzhen, Xi said the special economic zone should "pilot and pioneer" in making improvements in key areas such as innovation and industrial supply chain integration and law-based internationalized business environment.

He further urged his colleagues and cadres to develop an economy with innovation as the top driving force, calling it "the fundamental way out" of global competition pressure.

"Development is our primary task; talent is our number one resource; and innovation is the top driving force," he said. "We need to unswervingly implement an innovation-driven development strategy to foster new engines" by attracting "world-class science and technology talent ... to leverage global brain power."