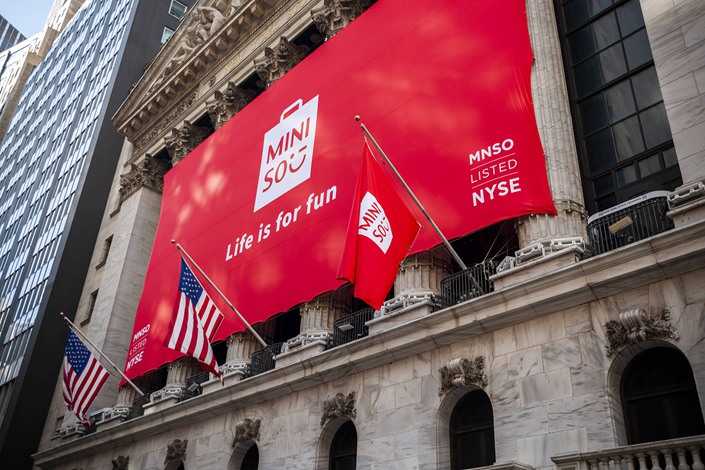 Founded in 2012, the Muji lookalike focuses on selling trendy, affordable products, ranging from cosmetics to personal accessories to household goods.

Miniso Co. Ltd.’s stock closed up 4.4% late Thursday, after surging as much as 22% in its debut on the New York Stock Exchange that raised $608 million.

The Guangzhou-based budget household goods retailer, which has been described as a copycat of Japanese brand Muji, is among many Chinese companies going public in the U.S., even as others flee U.S. financial markets amid increased regulatory scrutiny and hostility from Washington.

Firms based in China have raised $9.1 billion through U.S. initial public offerings this year, according to data compiled by Bloomberg, putting 2020 on course for the highest annual total since 2014.

Miniso founder and CEO Ye Guofu, whose personal stake in the company fell from 80.8% to 72.5% after the IPO, said Thursday that Miniso’s core advantage was its ability to deliver quality products at competitive prices, along with its strategy of refreshing its product line-up every seven days.

In April, he told Caixin that now is the time for budget retailers to prosper. “The pandemic-induced economic recession sets forth the best time for bargain brands to rise,” he said.

Founded in 2012, the Muji lookalike focuses on selling trendy, affordable products, ranging from cosmetics to personal accessories to household goods. It’s a business model that Ye picked up during his decade running Aiyaya Co. Ltd., a brick-and-mortar retailer that sold a variety of products for 10 yuan ($1.48) a pop.

Backed by Chinese tech behemoth Tencent Holdings Ltd., Miniso reported a gross merchandise volume (GMV) of 190 million yuan in 2019, with more than 95% of its sales from products priced less than 50 yuan, according to its prospectus. Ye told Caixin that he wants to have 90% of what Miniso sells priced under 30 yuan.

Miniso’s discount business model takes advantage of low-cost bulk purchases from a staple of suppliers and mass-manufacturing capacity in southern China. It has opened more than 4,000 stores around the world, 40% of which are scattered across 80 countries outside China.

The company’s expansion has been driven by its asset-light franchising model, under which partnering merchants pay for the right to use Miniso’s trademark and receive Minino support for things like hiring and warehousing. Stores managed directly by Miniso account for only 3% of the company’s total.

With an exclusive focus on brick-and-mortar retailing, Miniso took a big hit from Covid-19. Its first quarter and second quarter revenues plunged 25% and 38% year-on-year, leaving it 263 million yuan in the red for the fiscal year that ended in June.

Ninety percent of the company’s revenue comes from merchandising, while 7% comes from license leasing and management consulting.

In its prospectus, Miniso said it will use its IPO proceeds to open more stores, invest in factory warehouses and its logistics network, as well as upgrade its information technology system.