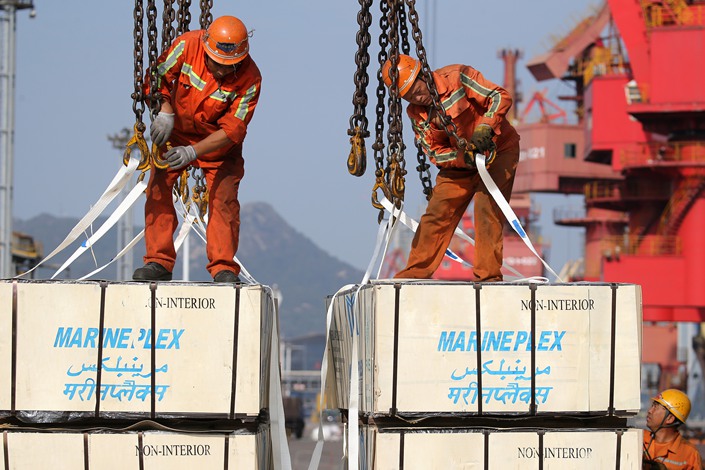 China’s national legislature passed an omnibus export control law on Saturday, mandating the government to consolidate its export control regime and take actions against violations from oversea entities and individuals.

The passage of the Export Control Law (link in Chinese) came after a week-long review last week by the National People’s Congress (NPC) Standing Committee, the top decision-making body of China’s national legislature. The law will come into force on Dec. 1.

The law allows government agencies to control the export of dual military and civilian-use items, military-use and nuclear items, and other goods, technologies and services related to performing international obligations or ensuring protection of national security and interests.

The Communist Party’s Central Military Commission and China’s cabinet, the State Council, will govern the export control regime, which will be administered by several government agencies including the Ministry of Commerce and the General Administration of Customs.

The new law did not include a list of items that will fall under export control rules, but said that relevant government agencies will develop and maintain their own lists. Export control lists are currently scattered across multiple regulations covering arms, chemicals and nuclear exports.

In late August, the commerce ministry expanded its technology export control list to include new items such as “personalized information recommendation services,” a data-based content promotion technology used by Chinese tech giant ByteDance, which runs the video-sharing app TikTok that U.S. President Donald Trump has threatened to ban if its local operations are not sold to a domestic company.

During the review last week, Zhang Yesui, chairperson of the NPC foreign affairs committee, suggested controlling exports of some of China’s cutting-edge technologies such as 5G and quantum communication tech, the state-owned newspaper Legal Daily reported.

Ouyang Changqiong, another member of the standing committee, also suggested during the debate that export-controlled items’ associated technical data such as source codes and algorithms should be protected, the report said.

The law stipulates that “overseas entities and individuals” who violate the law will be held accountable, and China will take “reciprocal countermeasure” against any countries or regions who abuse export control measures to endanger China’s national security or national interests.

“It appears that China intends to strengthen its export control regime in part to provide counter measurements to the tightened US export controls perceived as targeting China and Chinese companies such as Huawei,” Liza Mark, chief representative of international law firm Haynes and Boone in Shanghai, said in a post on the firm’s website.

After the law is adopted, Mark said, “we expect to see new and consolidated export control lists ... These control lists may also include critical natural resources such as rare earth metals, a potentially powerful tool for China to disrupt global supply chains.”

Covington & Burling LLP, also an international law firm with offices in China said in a note that the new law brings China's system "somewhat closer" to other export control regimes that contains the key fature that it applies both domestically and extraterritorialy.

However, it leaves unanswered a number of key questions of how the system will work in practice, including how its provisions will apply outside of China, the note said.