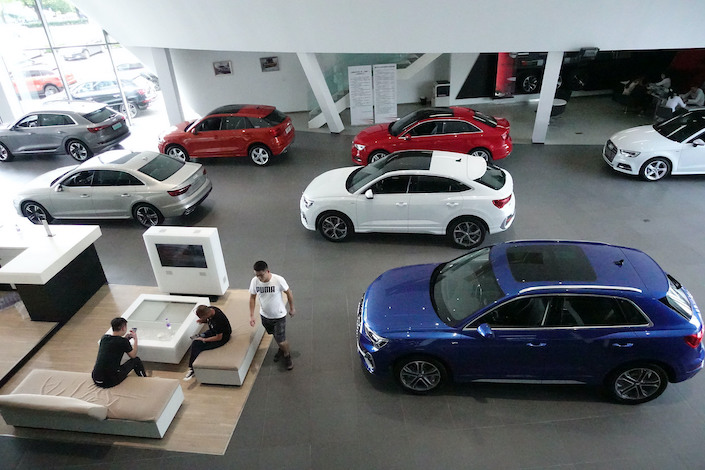 An auto dealership store in Nanjing.

Shanghai Dongzheng Automotive Finance Co. Ltd. was suspended from the dealer loan business, and its controlling shareholder was asked by regulators to exit the company within three months.

In imposing the rare penalty on a Chinese auto financing company, the Shanghai Bureau of the China Banking and Insurance Regulatory Commission found the enterprise in serious violation of the principle of prudent operation, the commission said Monday.

ZhengTong Auto Services Holdings Ltd., controlled by billionaire Wang Muqing, improperly obtained approval to set up Dongzheng Automotive Finance in 2015 and has since conducted illegal related-party transactions with Dongzheng, the regulator said in an administrative decision. The commission revoked the approval for ZhengTong’s investment in Dongzheng and ordered the exit of ZhengTong from the auto finance unit.

Dongzheng is one of 25 licensed auto finance companies in China and the only one backed by a dealership group. ZhengTong, a leading imported car dealership group in China, owns 71.4% of Hong Kong-listed Dongzheng. Through the offshore trust Joy Capital Holdings Ltd., Wang controls 51% of ZhengTong.

In April and August 2019 and in August this year, Dongzheng violated prudent operation principles in pre-loan investigations for providing loans to car dealers, in fund payment management and control, and in post-loan management, the regulator found. The company seriously jeopardized the stable operation of the business, the commission said. The decision didn’t provide specifics on the violations.

ZhengTong operates 134 dealership outlets of luxury brands, such as Porsche, Mercedes-Benz, BMW, Audi, Jaguar, Land Rover, Volvo, Infiniti and Cadillac, according to its website. The group also operates dealerships selling middle-market brands such as FAW Volkswagen, Buick, Nissan, Toyota, Honda and Hyundai. In 2013, Wang was listed by Forbes as the richest billionaire in Hubei province.

Before founding ZhengTong, Wang worked at a state-owned construction installation engineering company in central Hubei province for 25 years. He quit the company in 1996 and became a truck dealer, selling vehicles made by Dongfeng Motor Corp., a state-owned automaker that has business ties with his former employer. In 1999, he set up his first auto store in Shanghai to sell passenger cars made by the joint venture of Dongfeng and Nissan. Dongfeng is also a minority shareholder of Dongzheng.

In 2015, Wang stepped into the auto financing business by founding Dongzheng. The company provides financing for retail auto buyers as well as loans to dealers. As of the end of June, among Dongzheng’s 923 dealer customers, 118 were ZhengTong dealers and 805 were outside dealers.

Wang has already started to wind down his holdings in the dealership business. He agreed to sell 29.9% of ZhengTong for HK$1.4 billion ($180.6 million) to Shenzhen-listed auto dealer Xiamen Xindeco Ltd., ZhengTong said Tuesday.