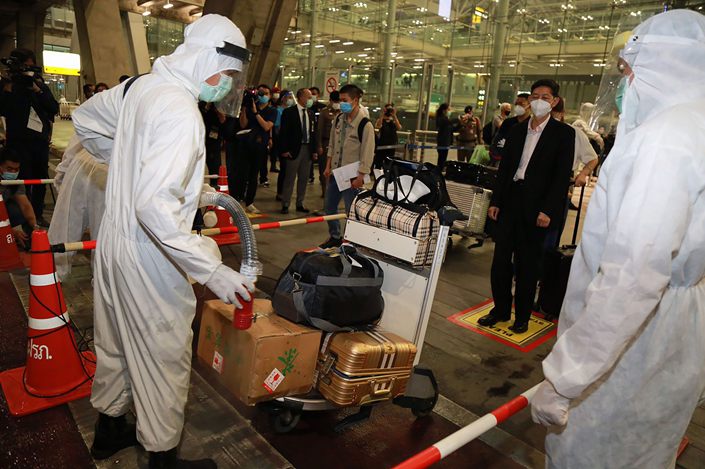 (Nikkei Asia) — Limited flight availability has prompted hundreds of Chinese to apply for Thailand’s newly introduced special tourist visas, seizing the opportunity to enter the kingdom to resume their business activities or gather with family members after a six-month separation.

Thailand formally rolled out the special visa in October, its first tourist visa after closing the borders since March to contain the spread of Covid-19. The new visas allow tourists from “low-risk” countries to enter Thailand for long stays of up to 270 days.

The government said there are two special tourist visa flights scheduled from China, on Oct. 20 to Bangkok and Oct. 26 to Phuket, with another group from Scandinavia on Nov. 1. The visas will be offered until September 2021, and it’s expected to have 1,200 travelers every month.

The special visas are intended to persuade well-heeled foreigners to come to Thailand and spend to salvage a badly hit economy, especially eyeing European retirees eager to flee the freezing winter and enjoy sunny beaches.

But the stringent requirements — such as paid bookings for the quarantine hotel as well as all of their intended stay, at least half a million baht ($16,000) in savings and Covid-19 coverage issued by Thai insurers — have put off general tourists.

One visa agent told Nikkei Asia that entering Thailand on a special tourist visa will cost at least 150,000 baht. Before the pandemic, individual tourists visiting Thailand could spend as little as 10,000 baht on a round-trip flight, while sharing a four-night hotel with their partner for 5,000 baht each.

But many Chinese are still applying for the special visas, as they have existing Thai connections — some want to supervise their business activities here, some have children studying in international schools, while others want to manage their property portfolios — and would like to return soon to deal with such matters, according to three persons familiar with the situation.

Currently, foreigners are allowed into Thailand on such specific visas as medical, business, study and work, while general tourists are still being shut out of its borders. It is understood that the process of getting a visa, and an extra document called the certificate of entry (COE), from overseas Thai embassies now is time-consuming.

“Some applicants have to be interviewed and the appointment queue in Shanghai [consulate] is fully booked into November,” one person said.

With the visa and COE on hand, a new ordeal surfaces: Chinese applicants will have to scramble for a flight. In the case of China Southern Airlines, it only offers around 200 seats per trip between Guangzhou and Bangkok, the same person said.

That has forced many Chinese who want to return quickly to the Southeast Asian country resort to pay about 40,000 yuan ($6,000) for an agent to sort out the special visa.

“The flights are scarce now and despite getting their visa, some can’t get on board a plane,” said Zoey Chen, a consultant with ithaihome.com, a Bangkok-based Chinese portal for Thai real estate buying and leasing which also offers visa services.

“A client had to fork out 15,000 yuan from a tout just for a single trip,” she said, though adding that embassies are offering secured seating for special visa holders in an effort to promote them. Chen already has 10 customers who have applied for the visas.

China’s civil aviation regulator since March has restricted flights in and out of the country. Dubbed the Five-One policy, the rule limits all domestic airlines to one international flight per week to each country, while foreign airlines can fly into China no more than once per week.

An e-commerce businessman from eastern Zhejiang province, who gave his name Wu, is an early applicant for the special visa and expected to come to Thailand by the end of October.

“Thailand is my business focus for the second half of the year,” he said. “I wanted to go back as soon as possible or else I am losing half a million yuan in revenue this year.”

But not everyone is willing to pay a hefty price to travel to Thailand.

“The price is too much ... not to mention I have to be quarantined in Thailand and also in China when I go back,” said Queenie Zhang, who has traveled to the country three times with her family. “I will wait when the quarantine policy is scrapped.”

Her wait could be over soon, as Thailand is in talks with China to establish the first quarantine-free travel corridor by January to rescue its ailing tourism industry, reported Bloomberg on Oct. 15.

This will materialize if the first batches of the special visa travelers do not test positive for the coronavirus, the report said.

China accounted for more than a quarter of the Southeast Asian tourist arrivals before the pandemic. About 11 million Chinese holidayed in Thailand in 2019, contributing about $17 billion in revenue, the report said.