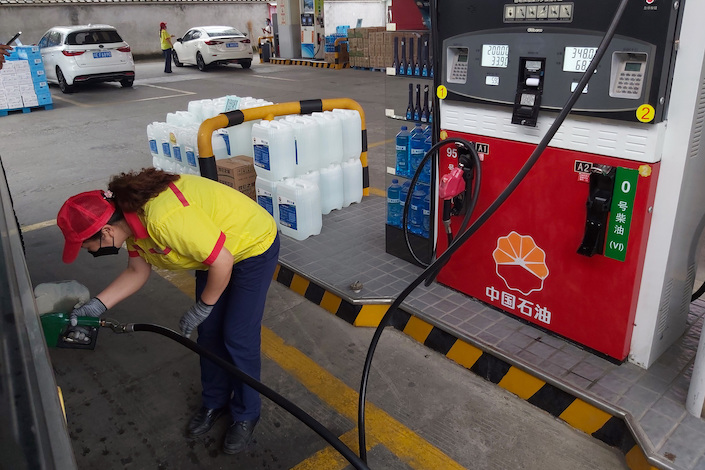 A former employee of China’s state-owned oil giant with a history of mental illness committed suicide after killing four people including an ex-supervisor, bringing to light a years-long dispute at a subsidiary of China National Petroleum Corp. (CNPC).

“I killed Zhang Yuxiang,” said a message that several people received at noon Monday from Li Xiaofei, Caixin learned. Zhang was the assistant to the general manager of CNPC Xibu Drilling Engineering Co. Ltd and a senior manager at the company’s Yumen Drilling unit. Li was Zhang’s secretary at the Yumen unit, where he worked between 2011 and 2018.

Police in Xi’an, the capital of southwest China’s Shaanxi province, confirmed that Li, 33, killed himself by jumping off a building later that day. Li killed four people in Xi’an before committing suicide, according to police updates Monday night. The dead include Zhang and his wife and two property management staffers at Li’s former office. Further investigation is underway, police said.

Several people familiar with Li told Caixin that they received a message from Li early Monday afternoon saying he reported his crime to police by telephone.

Li suffered depression for a long time and was hospitalized five times between June 2016 and January 2018, court documents showed. A doctor in January 2018 diagnosed him with severe depression.

Li acknowledged his illness in a statement to a court in July 2020. But he said his mind remained clear and logical.

According to local police, Li had longstanding disputes with his former employer. Public documents showed that Li claimed he blackmailed several senior executives of CNPC Xibu Drilling for 400,000 yuan ($59,846) in April 2017. He went to police in Beijing, Shaanxi and Xinjiang since August 2017, accusing company executives of graft. But none of the departments pursued his allegations. He also published posts online regarding the issues.

Caixin was unable to reach CNPC Xibu Drilling and Yumen Drilling for comment. A CNPC spokesperson declined to comment.

The company said the money was a loan to Li to treat his mental illness. But Li said it was hush money to cover up violations by the company and demanded a criminal investigation. Courts in Xi’an turned the cases down citing lack of evidence from both sides.

Li posted many files, chat records and transaction records on his personal social media account, claiming that he was bullied by coworkers. In the posts Li said he had evidence of graft cases among company leaders.

One post showed a transaction record in April 2017 indicating that 400,000 yuan was transferred to Li by an unrelated party.

Zhang was a senior manager at Yumen Drilling at that time. In June 2018, CNPC said Zhang and several others were investigated for law and regulation violations without giving details. However, in 2019 Zhang was promoted to the post of assistant to the general manager of CNPC Xibu Drilling.

Li wrote on his social media account that he sent reports about graft in the company and his blackmail to the anti-graft bureau of the Supreme Procuratorate in June 2017. The Procuratorate assigned a Beijing district police station to investigate. The case was terminated due to lack of evidence.

In January, Li again reported his allegations to the Ministry of Public Security and the Supreme Procuratorate, but the case again was not pursued, according to Li’s posts and court documents.