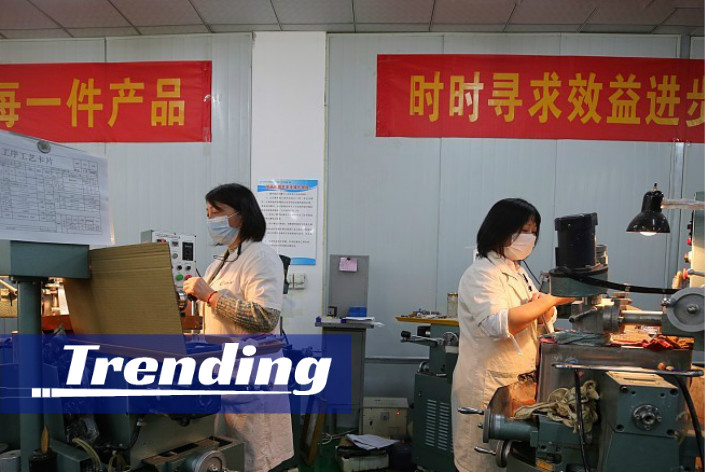 The trending term #如何看待蓝领月薪高过大学生# (#BlueCollarSalariesBeatCollegeGrads?) has been viewed by 39 million social media users and commented on by nearly 2,000. As consumption in the third quarter recovers and China gears up for the “Double 11” shopping bonanza, orders at manufacturing plants have picked up significantly, and blue-collar workers are in increasing demand. According to a local media report this week, many now earn more than 10,000 yuan ($1,488) a month, far more than college graduates, who typically secure their first jobs with a starting salary of 4,000 yuan or $595.

The National Economic Daily reported that in one electronics factory in Jiangsu on Tuesdays, workers recruited on salaries of 8,000 yuan a month were poached by the next door factory for 10,000 yuan as soon as they arrived. “All factories are short of people,” Zhou Feng, head of a recruitment firm, told the paper, illustrating that the previously sluggish factory recruitment sector was seeing a massive turnaround in its fortunes.

Commentators were wary of making too much of the story, reminding readers that Huawei recently offered 2 million yuan salaries to highflying PhD graduates. “Don’t compare the end point [of one group of workers] with the starting point on the other!” said one, garnering over 10,000 likes.

Many noted that manufacturing work is tough, and people in these kinds of jobs can only earn a good salary if they put in overtime and work shifts. “There is no eight-hour shift that earns 10,000 yuan,” pointed out one Weibo user.

A longer comment expanded on the theme, “No one is willing to work at the grassroots level [for long]. For example, welders, riveters, turners, steel workers, carpenters, bricklayers. These types of jobs are dirty and tiring, and college students may do it for a while, but the quality won’t be great. After graduating from university, they won’t want to work these types of jobs: it’s a matter of respect, but also simply about suffering. In this way, wage increases [for skilled factory work] will inevitably continue for a long time to come.”

“Does education determine wages? Of course not! Demand affects value, value determines costs, blue-collar shortages make jobs more highly prized. Talent will flow in at a high cost [to factories]. This is self-regulation of the market and there’s nothing wrong with it,” posited one free-market enthusiast.

Related: Trending in China: Drink or Get Slapped! The Choices Facing New Recruits in China