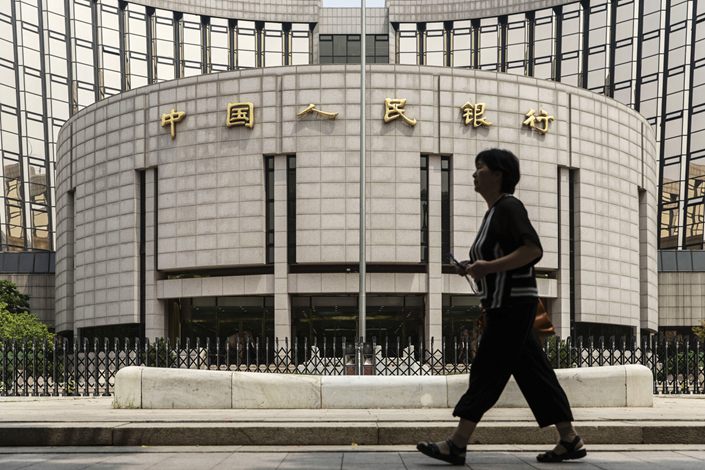 A pedestrian walks past the People’s Bank of China headquarters in Beijing in June 2019. Photo: Bloomberg

(Bloomberg) — The recent strength in China’s currency faces a new hurdle after the nation’s banks abandoned inclusion of a key factor used to calculate the yuan’s daily reference rate.

The lenders stopped using the counter-cyclical factor recently, according to a statement on the website of China Foreign Exchange Trade System. The factor is part of how the banks calculate a quote for the reference rate, known as the fixing, which they submit to the People’s Bank of China (PBOC) for a final rate every morning. The fixing restricts the onshore yuan’s moves by 2% on either side.

On Wednesday, the daily reference rate was set at 6.7195 per dollar, in line with the average of 18 estimates compiled by Bloomberg. All estimates had accounted for the new calculations.

The offshore yuan was little changed after Wednesday’s fix.

The change effectively allows Beijing to give up some influence over the exchange rate. Under the tweak, lenders would have more room to submit quotes for a weaker fixing and guide the currency lower in the spot market. The shift toward greater flexibility comes after the central bank this month made it cheaper to short the currency with forwards as the yuan’s gains accelerated.

Dropping the counter-cyclical factor “is the strongest tool other than direct intervention in the market that the PBOC has to change the value of the currency,” said Dariusz Kowalczyk, senior emerging-markets strategist at Credit Agricole CIB. “The counter-cyclical factor is the most intuitive and the most direct one because it directly impacts the level at which the fixing is set.”

Reuters had reported earlier Tuesday that the PBOC had asked some of the 14 banks that help set the fixing to adjust their models, citing people familiar with the matter.

The yuan has rallied more than 6% from a low in May to near its strongest in more than two years. Investor sentiment has gotten a boost from China’s economic rebound from the damage the virus did earlier in the year and the greenback’s weakness. The surge is also being propelled by a wide interest-rate premium over the rest of the world, and by polls that indicate Joe Biden leads incumbent Donald Trump in the U.S. presidential contest on Nov. 3.

The counter-cyclical factor was introduced in May 2017 to rein in depreciation and capital outflows before a leadership reshuffle of the ruling Communist Party. It was suspended in January 2018 as the yuan rebounded, and reinstalled seven months later amid souring China-U.S. relations.

The PBOC sets the fixing, which limits the onshore yuan’s moves to 2% in either direction, at 9:15 a.m. every trading session based on submissions from the 14 banks. Apart from the counter-cyclical factor, their formulas for the rate typically take into account the currency’s official closing price the day before and moves in other major exchange rates.

The fixing is an important tool Beijing uses to guide market expectations for the yuan. Officials can also also exert influence over the exchange rate by issuing verbal warnings to traders and adjusting the supply of liquidity — measures they haven’t resorted to during this period of yuan appreciation.