China Reconsiders Its Global Strategy for the Yuan 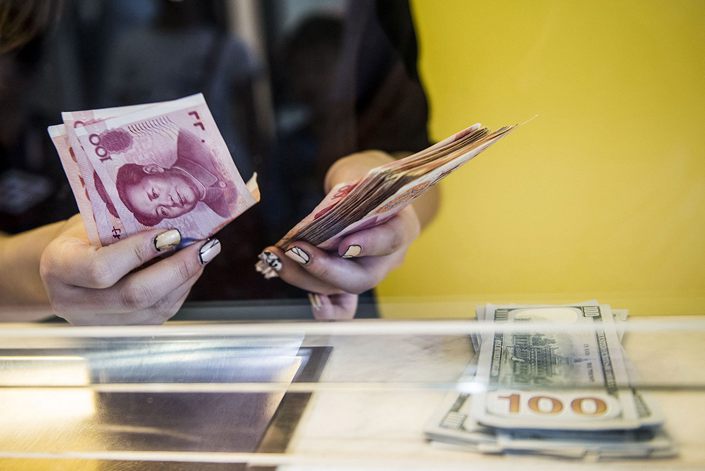 An employee at a currency exchange store counts Chinese 100 yuan banknotes next to a pile of U.S. 100 dollar bills in Hong Kong on Aug. 12, 2015. Photo: Bloomberg

(Bloomberg) — China is reconsidering its strategy for the internationalization of the yuan and planning for more policy support after completing a comprehensive review recently, according to a senior central bank official.

“As everybody knows in the past, the internationalization of the RMB (yuan) sticks to the market principles,” Zhu Jun, director general of the People’s Bank of China’s international division, said at the Bund Summit in Shanghai on Saturday. “The role of the authorities was mainly focused on removing the policy obstacles for the free use of the currency. At this moment, we think there are some kinds of complications in the domestic and overseas situations.”

Zhu said the government can be more proactive with policy support to facilitate the role of the markets. For instance, the central bank can improve bilateral currency swap agreements to better promote trade and investments, and try to coordinate various means of yuan cross-border settlements and payments infrastructure.

The yuan rallied to the strongest in more than two years earlier this week, aided by dollar weakness and China’s economic recovery from the virus pandemic. The prospects of a victory by Joe Biden over President Donald Trump in the upcoming U.S. election are also supporting the currency. Trump’s trade war with China last year sent the currency to its lowest since 2008.

The authorities will remove existing obstacles for the yuan’s internationalization, with a steady liberalization of the capital account, increasing the yuan exchange-rate flexibility and improving liquidity in the bond market, Zhu said.

While China over the years has made some progress — promoting offshore yuan trading, winning official reserve-currency status from the International Monetary Fund and introducing commodity contracts priced in yuan— the yuan, also called the renminbi, is a small player on the global stage, with 2% market share.

And while a steady opening of China’s financial markets to overseas investors has lured some inflows, foreign ownership of mainland stocks and bonds is still relatively minor. China’s capital account, a term for the flow of funds across borders, remains subject to significant regulations on the transfer of the yuan.

Separately, central bank governor Yi Gang said on Saturday the reform of the yuan exchange-rate formation mechanism and the internationalization of the currency should be jointly promoted with the financial opening.

“The yuan internationalization should be market-oriented,” he said. “The regulator’s main job is to reduce restrictions on the cross-border use of the currency, and let it take its own course.”

The increasing spillover of Chinese-American tensions into the financial sphere has ignited a fresh push by China to promote the global use of the yuan. Some government officials including Fang Xinghai, the vice chairman of the China Securities Regulatory Commission, have urged an acceleration of the yuan’s globalization in recent months.

With assistance from Fran Wang