By Wen Simin and Ju Yiwen 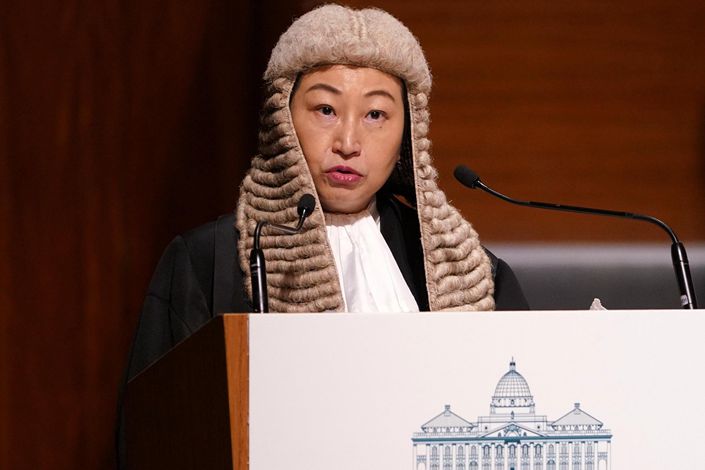 The Hong Kong government has proposed applying the jurisdiction of its laws and arbitration to Hong Kong-owned companies operating in the Guangdong-Hong Kong-Macau Bay Area in an effort to boost cross-border investment and integration.

Hong Kong Secretary of Justice Teresa Cheng said the government was “exploring and studying the possibility of introducing” the initiative, according to an article posted Monday on the department’s website.

“This initiative, if successfully implemented, will become another piece of good news for the Hong Kong legal sector and business, and attract more investment in the Bay Area,” Cheng said, without elaborating on the plan’s details.

The proposal follows President Xi Jinping’s reassurance of the central government’s support for the Bay Area’s regulatory interface and economic connectivity during a ceremony celebrating the 40th anniversary of the Shenzhen Economic Zone on Oct. 14.

Hong Kong Chief Executive Carrie Lam will visit Beijing next week to seek more central government support to boost the financial hub’s economic recovery after Covid-19. It is not immediately clear whether Cheng’s law proposal will be on the agenda.

The three different legal systems of Hong Kong, Macau and the Chinese mainland have separate jurisdiction in the Bay Area, which could complicate the settling of civil and commercial disputes. Hong Kong operates under a common law system while Guangdong is governed by mainland law.

The proposed initiative has precedent, having been trialed in the Qianhai development zone in the city of Shenzhen. In August, Shenzhen adopted a new local regulation that allows cross-border investors, including more than 11,000 Hong Kong companies in Qianhai, to choose their legal jurisdiction when entering into civil and commercial contracts.

Cheng said the proposed new measures would “no doubt encourage more lawyers from Hong Kong to provide legal services, after obtaining mainland practice qualifications, to enterprises with investments in the Bay Area.”

The guidelines for Hong Kong and Macau legal practitioners to obtain mainland qualifications have been recently customized to allow them to qualify to practice on the mainland. Hong Kong solicitors and barristers with five years of experience in a practice are allowed to apply for judicial qualifications in the Bay Area. Once passed, they can practice law in the nine Pearl River Delta municipalities.