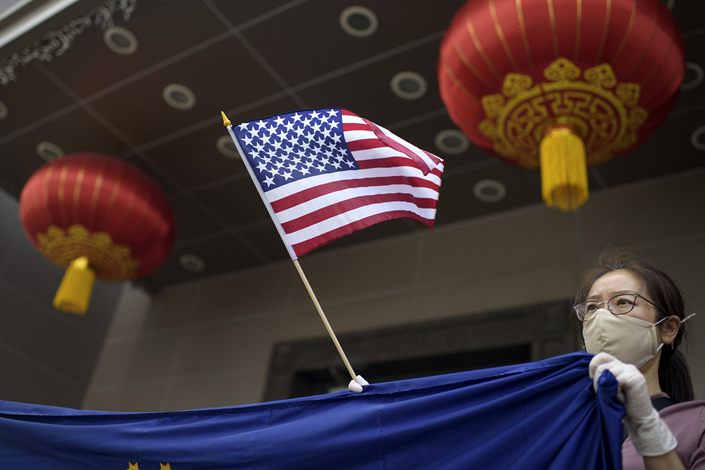 A protester holds a US flag outside of the Chinese consulate in Houston on July 24, after the US State Department ordered China to close the consulate. Photo: Bloomberg

(Bloomberg) — As U.S. voters prepare for next week’s presidential election, Chinese investors have already decided what they think the outcome will be: the continued decoupling of the world’s two largest economies.

A victory for Democratic candidate Joe Biden would likely result in a toning down of anti-China rhetoric from the White House, fund managers say, but it wouldn’t change the now-bipartisan view in Washington of Beijing as a strategic rival. Regardless of the outcome, two camps have emerged: one that is holding on to its current strategy and another that is reducing its exposure to potential stock volatility.

“I will continue to stay away from telecommunications and semiconductors, anything that may be hurt by worsening U.S.-China relations,” said Qi He, fund manager at Huatai Pinebridge Fund Management Co. “But that applies to either candidate.”

He has been overweight on consumer stocks amid moves toward companies including Huawei Technologies Co. and Semiconductor Manufacturing International Corp. by President Donald Trump’s administration, which have rattled markets in recent months.

Chinese stocks have been resilient this week, not following the worst drop for U.S. stocks in four months, with a volatility measure on the Shanghai Composite Index nearing the lowest in a year. However, some are bracing for an election jolt — however short-lived that may be.

Given that polls were so poor at predicting the Trump victory in 2016, Liu Wei, fund manager at Beijing Zhikai Investment Management Co., said he expects more volatility and uncertainty down the road. “We’ve decreased exposure in A-shares by around 20 percentage points to dampen any kind of market shock from the election,” Liu said.

Some see volatility as a more immediate possibility should the election be close. “The risks are greatest if we see a dog fight, with Trump losing by a very small margin,” said Chen Da, managing director at Anlan Capital. “He would probably not relinquish his claim to power peacefully if that happens.”

Rather than prepare for that outcome by reducing exposure onshore, Chen said he is planning to hedge through VIX futures, if it begins to look like the election is going to be a close call.

“From experience we find that event-driven investment decisions don’t pay off that well,” he added. “These things are in effect a bet on a bet — you have to get the election outcome right, and then the reaction in stocks right, so it’s very easy to get it wrong.”

There are mixed views on what the impact on Chinese tech stocks would be if Biden wins — as current polling predicts. Xiong Qi, deputy head of research at Windsor Capital Management Co. in Beijing, said the advisory firm had reduced its positions in the sector due to risk concerns regarding Biden. “He may boost taxation, which will weigh on tech stocks in the U.S.,” Xiong said. “Chinese tech stocks will also feel the pressure.”

On the other hand, a Biden win would benefit China tech and export stocks the most, said Shanghai-based independent economist Andy Xie, who made a name for himself at Morgan Stanley in the early 2000s.

“The tech war should ease off under Biden — there will likely be more transparency in supply chain access,” Xie said. A Biden administration would pursue reciprocity and give Beijing some time to open up before imposing new sanctions, he added. “Export stocks are massively undervalued because investors don’t know if further tariffs will come on.”

“Biden may be less confrontational when dealing with China compared with Trump,” Hong said. “But the rivalry in the areas of military, finance, technology and ideology is on.”