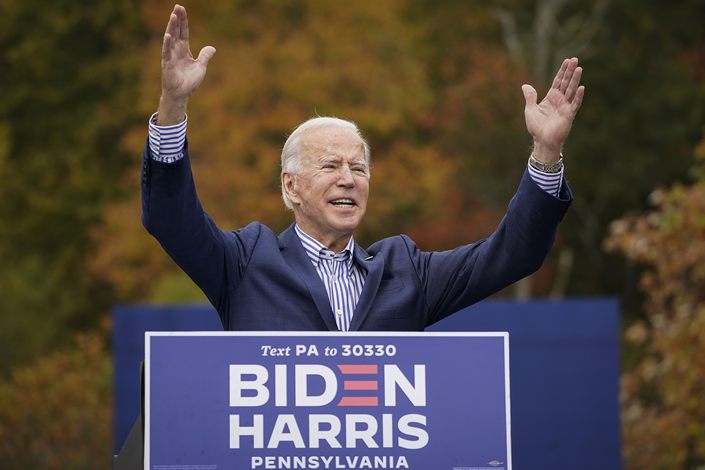 There can be no doubt that China-U.S. ties, the most consequential relationship of the century, have sunk to their lowest point.

Over the last four years, Beijing and Washington have clashed on almost all fronts, from trade to geopolitical flashpoints, from student visas to a tit-for-tat media war. There are concerns over what lies ahead for the two nuclear powers if the current trend continues to simmer.

If the 77-year-old Democratic challenger prevails on Nov. 3, a Biden White House could provide an opportunity for the U.S. and China to recalibrate their relations.

The former U.S. vice president has a real chance to win. As of Tuesday, according to the latest state polls collected by the Real Clear Politics website, Biden leads in 14 out of the total 17 battleground states, including Florida, Pennsylvania, Wisconsin and Michigan — the four key states that defined Donald Trump’s win in 2016. That year Hillary Clinton lost to Trump in all of these swing states, which Barack Obama won in his reelection bid in 2012.

Biden also knows the Chinese leadership well. During his vice presidency, he visited China twice. In the second visit in Beijing in 2013, he met with President Xi Jinping for a straight five and half hours, including a two hour one-on-one meeting reportedly only accompanied by interpreters. He also dined at a traditional local fried liver restaurant (姚记炒肝) in Beijing in his 2011 visit, which created a social media storm in China.

However, circumstances have changed. Biden’s China policy would neither resemble the combativeness of Trump, nor the restrained nature of Obama’s approach — it would feature his own characteristics. His advisers have already signaled that Biden would assemble the most diverse cabinet in the U.S. history; even Republicans may have seats in Biden’s cabinet. This could spark a different set of China policies that fits the more progressive leaning environment of the current Democratic Party, and it is almost certain that it would create new problems for Beijing.

Although what has been done by the Trump administration to U.S.-China relations cannot simply be undone, Biden could reset the relationship with Beijing in three ways.

“Biden's China policy would neither resemble the combativeness of Trump, nor like the restrained nature of Obama's approach — it would feature his own characteristics.”

Biden could propose a summit with Xi as an effort to get the bilateral relationship back on track. Beijing would also be looking to engage with a Biden White House and is comfortable with this kind of leadership diplomacy, which the Chinese side favors to settle issues.

The last time Trump and Xi met was during the G-20 summit in Osaka, Japan in June last year. Before the signing of the phase-one trade deal in January this year, it was speculated that Xi and Trump could meet in a third country and sign an agreement to end the bitter trade war — but it did not happen. The two leaders haven’t met since, for more than a year.

Thus a Biden-Xi summit is urgently needed for both sides, particularly because tension between Beijing and Washington has been further inflamed by the two militaries’ activities in the South China Sea and the Taiwan Strait, even when it is close to the presidential election. The two leaders need to sit down and talk to avoid any military mishap.

Choice of secretary of state

Biden could pick someone in his inner circle as his top diplomat. Many names have been floating around Washington this month and Biden’s successor from his home state Delaware in the U.S. Senate appears to be a leading candidate: Democratic Senator Chris Coons. Coons, who has 10 years of experience on the Senate Foreign Relations Committee, openly expressed his eagerness to do the job.

“Joe Biden and I have very similar, closely aligned views on foreign policy,” Coons said in a statement, adding “He’s got a lot of great folks from whom to choose, but if he were to consider me as well, I’d certainly be honored.” The Washington Post’s legendary Pulitzer Prize-winning commentator George Will publicly endorsed Coons, saying that the senator is the one to “repair the recent damage to his nation’s prestige and security.”

What is unique about Coons is that he has been branded as a bipartisan choice, a “Republican whisperer.” And indeed as a Democrat, he supports many policies that the other side of the aisle favors. He is a staunch supporter of Israel, opposed Obama-era government bailouts worked with several senators including Marco Rubio, and signed a letter to Mike Pompeo raising concerns over Chinese state media’s alleged influence in the U.S.

There are also other names from the Obama administration that are familiar to Beijing, such as Susan Rice and Antony Blinken. But if Biden wants a diverse cabinet, he could choose someone that can talk to the Republicans.

Back to the TPP

The Trans-Pacific Partnership, a mega trade deal covering major economies in the Pacific region except China, was a signature achievement of Obama’s second term. Most importantly, it was the economic pillar of Obama’s “Pivot to Asia” strategy to counter China’s rising economic power, particularly by setting new standards and high-level market liberalization commitments among member countries.

Trump’s exiting the trade pact has been seen as a failure of the U.S. that in fact benefited Beijing. During the campaign, Biden said he would renegotiate the TPP and still saw it as a necessary counterweight to China. If a Biden White House reenters the deal, it would certainly tilt the status quo of free trade systems in the Asia-Pacific region. How he would handle this sensitive issue will certainly be closely watched by Beijing.