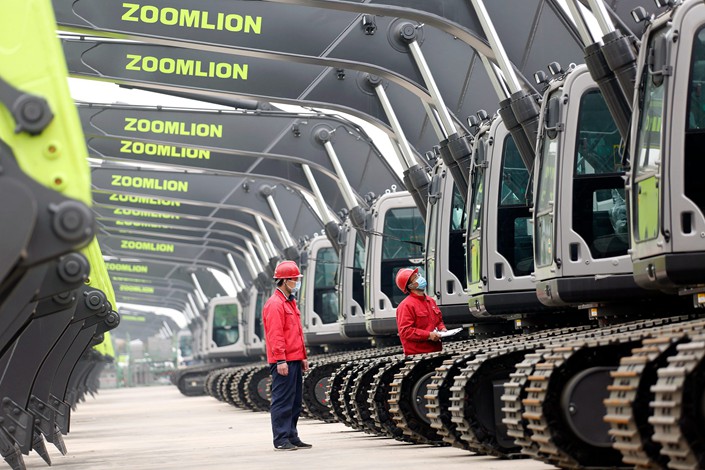 Inspectors examine an excavator before it leaves a Zoomlion factory in Weinan, Northwest China's Shaanxi province, on March 12.

The country’s 25 leading machinery-makers sold a total of 26,034 excavators in the nine months to September, up 64.8% from the same period last year, data from China Construction Machinery Association showed.

XCMG Construction Machinery Co. Ltd., another major player, also saw revenue increase 18.6% year-on-year for the first three quarters to 51.3 billion yuan. But profit fell by nearly a fifth over the same period to 2.4 billion yuan, which the company attributed to skyrocketing currency exchange losses. Its expenses spiked more than tenfold to nearly 800 million yuan over the first three quarters, largely due to the collapse of the Brazilian currency, the real. XCMG has two subsidiaries in Brazil, and the real sank to a record low against dollar in March this year, despite government efforts to support it amid the pandemic.

Macroeconomic data from the National Bureau of Statistics suggests machinery-makers will continue to benefit from China’s economic rebound, with domestic fixed-asset investment up 0.2% year-on-year for the first nine months and real estate investment up 5.6% year-on-year over the same period.

Analysts expect demand to remain high through the remainder of 2020, with Pacific Securities predicting excavator sales will grow by half in October, with robust growth continuing in the fourth quarter.