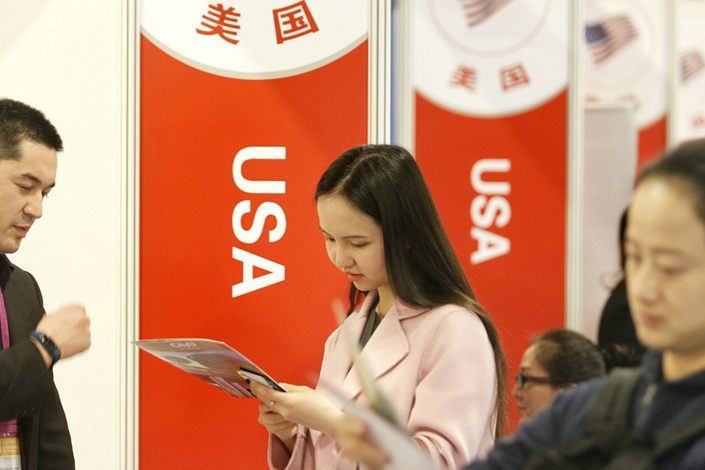 (Nikkei Asia) — U.S. visas issued to Chinese students have fallen dramatically as tougher screening by Washington and the pandemic discourage applicants amid rising tensions between the two countries.

The number of F-1 student visas granted to applicants on the Chinese mainland came to just 808 in the six months through September, down 99% from 90,410 in the same period a year earlier, according to data released by the U.S. Department of State. Chinese students make up the largest share of international students in the U.S., at roughly 30%.

The sharp plunge suggests that tensions between Washington and Beijing are affecting the career plans of Chinese students as well as academic exchanges between the two countries. Difficulty in obtaining American visas could steer some Chinese students toward other destinations, such as Australia, Canada and Japan.

“I’m worried whether my student visa will be issued,” said a 20-year-old studying law at a university in China’s Inner Mongolia region. She is applying for a law school in the U.S., with plans to start next September, but says, “I can only wait and see.”

Although the coronavirus pandemic has affected study-abroad programs around the world, the Chinese decline is sharper than the 88% global average. Among other countries for which the U.S. is a popular destination, the drop was 88% for India, 87% for Japan, 75% for South Korea and 60% for Mexico.

The Trump administration has argued that Chinese students and researchers steal American technology, intellectual property and research. It has tightened visa regulations, such as shortening the validity of visas issued to Chinese graduate school students studying in high-tech fields from five years to one year in 2018.

The State Department said in September said it revoked the visas of more than 1,000 Chinese students and researchers, citing their alleged ties to the Chinese military. Observers believe Washington dialed up pressure as China’s passing of a national security law covering Hong Kong further strained relations.

“This has gravely impacted the normal cultural and personnel exchange between the two countries,” said Chinese Foreign Ministry spokesperson Zhao Lijian, expressing strong opposition to the move. “We urge the U.S. to stop making use of various excuses to wantonly restrict and suppress Chinese students in the U.S., and to roll back the move immediately.”

Those already studying in the U.S. have seen the environment turn more hostile. A 23-year-old Chinese woman surnamed Li recalled a white woman yelling at her to leave the U.S.

Li is currently preparing to enter a doctoral program, having received a master’s degree in law after arriving in the U.S. last year. She said that since August, the procedures are taking longer because American authorities increased the number of documents that need to be submitted. Li heard from a friend seeking employment in the U.S. that getting a work visa has become difficult as well.

Many experts believe that even if Democratic candidate Joe Biden wins the election, some of the sanctions against China imposed by the Trump administration will likely remain in place, the Wall Street Journal wrote last week. Biden has hinted that he will be tough on China, so the predicament of Chinese students appears poised to continue.

The U.S.’s soaring Covid-19 cases are adding to the concerns of applicants. Sang Peng, president of the Beijing Overseas-Study Service Association, said that parents are very worried about the coronavirus and this has led fewer students to pursue studying in the U.S.

A 24-year-old from Jiangsu province said that he changed his destination from the U.S. to Japan. He was learning art at a California college but returned to China because of concerns about Covid-19 and discriminatory remarks by his professor. He is currently applying to a language school in Japan with the aim of making the trip around March.

Roughly 660,000 Chinese newly traveled abroad to study in 2018, more than triple the figure from a decade ago, according to data from China’s statistics agency. The latest moves by Washington could change the ranking of top destinations. In 2019, the U.S. was the most popular country followed by Australia, Canada, the U.K. and Japan.