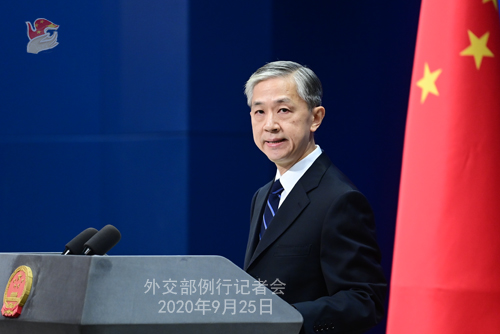 Wang Wenbin, a spokesman at Chinese Foreign Ministry, told reporters during a press conference on Friday that "Pompeo's allegations concerning Chinese diplomatic and consular missions in the U.S. and their staff are purely malicious slanders."

"It hasn't been long since the US unilaterally provoked an incident by flagrantly closing China's consulate general in Houston, to which China has made legitimate and necessary responses," Wang said, "Now it is again slinging mud at China in an attempt to justify its wanton acts. This shows a guilty conscience trying to cover up the obvious."

Wang urged the US to "immediately stop smearing Chinese diplomatic and consular missions and staff in the US, stop gathering vaporous rumors and provoking trouble." He added that "If one is looking for a record of misconducts, some US institutions in China and their staff won't disappoint them."

During an interview with the New York Post on Thursday, Pompeo accused the Chinese consulate in New York of "engaging in activities where they're crossing the line from normal diplomacy to the kinds of things that would be more akin to what spies are doing."

The U.S.' top diplomat also suggested that the consulate's efforts could extend to the United Nations' headquarters in Manhattan. "Remember, not only do we have Chinese consulates here, but there's a UN facility too,” he said, "They also have a large contingent of Chinese diplomats here for United Nations works."

Pompeo’s comments came on the same day the U.S. President Donald Trump accused a Chinese state-owned company of allegedly stealing an American chip-maker’s technology during a speech delivered to the U.N. General Assembly on Thursday in New York.

When asked by the New York Post for a comment, the Chinese New York Consulate said in a statement that "There has never been any 'espionage' activity and the accusation is nothing but vicious slander."

"The U.S. side deliberately distorts normal exchanges between the Consulate and its consular district with the false accusation, which is obviously groundless and unpopular," the consulate said.

In the interview, Pompeo also defended the State Department’s July decision to close Chinese consulate in Houston. "We closed it because they're engaged in espionage and that is a legal term,' he said, "It's not just a spy novel term. It is a very data-driven, analytic, fact-based analysis that says, 'No, this is espionage, it's unlawful, and therefore, we're going to send you back.'"

During a welcome ceremony for China's Houston consulate staff returning home in Beijing on Aug. 17, Chinese foreign minister Wang Yi said that the Houston consulate showed that anti-China forces in the United States are undermining bilateral relations and deliberately trying to block China's development, according to Xinhua news agency.

Amid the tit-for-tat frictions of closing each's diplomatic missions, Washington had further threatened to close more Chinese consulates in the U.S.

Also, in late July, Chinese consulate in San Francisco, was singled out by the U.S. prosecutors for allegedly harboring Juan Tang, a Chinese researcher with military background who were accused by the FBI of visa fraud.

Tang reportedly left the consulate and was subsequently arrested by the FBI. She was granted bail late last month and not allowed to leave the country, according to U.S. media reports.