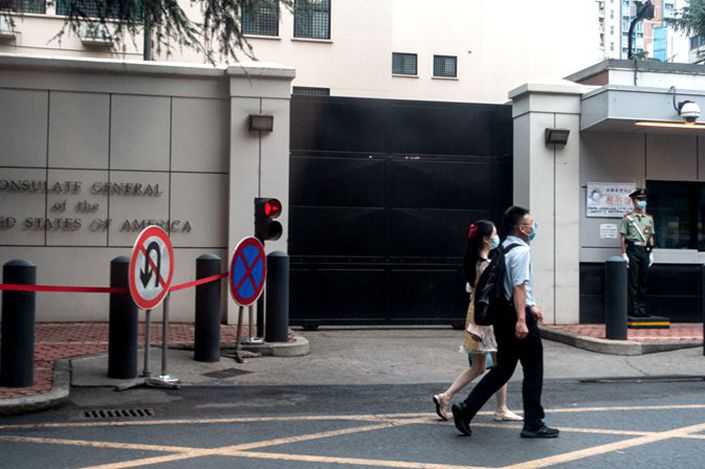 The U.S. Consulate General in Chengdu, Sichuan province, on July 23.

China’s foreign ministry said Friday that it told the U.S. Embassy in China to shut its consulate in the southwestern city of Chengdu, an apparent retaliation to Washington’s order to close the Chinese consulate in Houston.

“The Ministry of Foreign Affairs of China informed the US Embassy in China of its decision to withdraw its consent for the establishment and operation of the US Consulate General in Chengdu,” the ministry said in a statement, without elaboration on details. “The Ministry also made specific requirements on the ceasing of all operations and events by the Consulate General.”

During a Friday press conference, Ministry of Foreign Affairs Spokesperson Wang Wenbin accused “some personnel” at the U.S. consulate of “conducting activities which did not match their roles, interfering in China’s domestic affairs and damaging China’s security interests.”

The tit-for-tat move comes after the U.S. ordered China on Tuesday to close the consulate in Houston within 72 hours, marking what Beijing called an “unprecedented escalation” of tensions between the world’s two biggest economies since they normalized diplomatic relations in 1979.

Beijing called the retaliation “a legitimate and necessary response to the unjustified act by the U.S.,” and said Washington should be held “entirely” responsible for the drastic deterioration of China-U.S. relations.

Posts on Chinese social media platforms showed that shortly after the foreign ministry’s annoucement, firetrucks and policemen were present around the U.S. consulate in Chengdu.

The foreign ministry spokesman also said that China’s Consulate-General in Houston is still operating. “We urge the U.S. to withdrew its erroneous decision,” Wang said.

Cai Wei, head of the Chinese consulate in Houston, confirmed in an interview with U.S. media outlet Politico on Thursday that the consulate was “still operating normally” and would continue to do so “until further notice.”

“We prepared for the worst scenario but we’ve also launched a strong protest … so we urge the U.S. to abandon and revoke that wrong decision,” said Cai.

In a Thursday speech, U.S. Secretary of State Mike Pompeo accused the Houston consulate of being “a hub of spying and intellectual property theft.” Pompeo’s remarks marked the latest in a series of speeches critical of China by senior Trump administration officials.

Spokesperson Wang said Pompeo’s comments “ignored the facts, turned black into white, were full of ideological bias and showed a Cold War mentality. All of these are an assortment of China-related political lies.”

The Chinese Embassy in U.S. also refuted espionage accusations as “groundless fabrications.” “For the U.S. side, if it is bent on attacking China, it will never be short of excuses,” the embassy said in a statement Wednensday.

Meanwhile, a flight carrying an unspecified number of American diplomats reportedly left Washington Wednesday evening for Shanghai to restaff the U.S. mission in China, according to Reuters, a sign that the two sides could have reached an agreement in regard to diplomats being able to return to their posts in each other’s countries, despite the diplomatic row over closure of consulates.

The U.S. State Department was also planning two additional flights, one of which was tentatively scheduled on July 29, bound for Tianjin and Beijing, the report said.

Chinese foreign ministry’s Wang also said Thursday during a press conference that in June, some American diplomatic staff had returned and reopened the U.S. consulate in Wuhan, which was previously closed and evacuated due to the coronavirus outbreak in January.