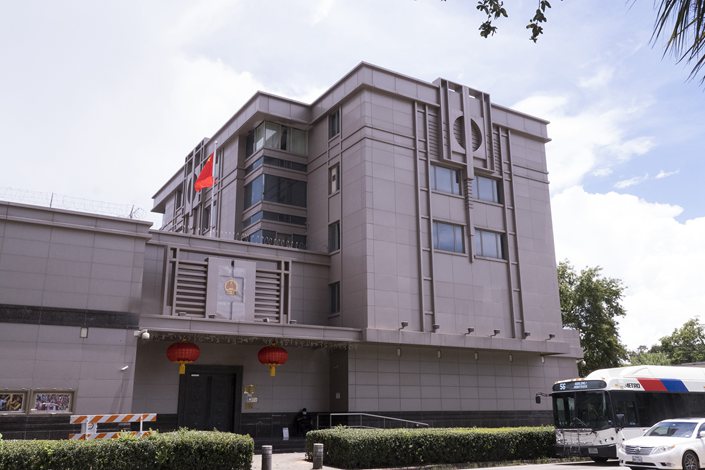 The Chinese Consulate General in Houston, Texas, on July 22.

China said its embassy in the U.S. had received “bomb and death threats” due to “smears and hatred” fanned by Washington, as the forced closure of its consulate in Houston marked an “unprecedented escalation” of tensions between the world’s two biggest economies.

“Our embassy in the U.S. recently has even received bomb and death threats on Chinese diplomatic missions and personnel in the U.S.,” said Wang Wenbin, a spokesperson for China’s Foreign Ministry, adding “the U.S. flagrantly drums up stigmatization and fans hatred against China.”

On Monday, the Chinese embassy received repeated phone calls, in which the caller imitated the sound of an explosion after asking “do you know what’s in your lobby,” Chinese news outlet The Paper reported. The embassy also received death threat emails on March 21.

The number of poison-pen handwritten and printed letters, involving attacks on the Communist Party or accusations related to Covid-19, had also increased sharply, according to The Paper.

Wang told a press conference Thursday the U.S. had twice opened without permission Chinese diplomatic pouches and seized items for official use in July 2018 and this June. Wang said the U.S. side “did not deny it” but excused itself by “citing technological reasons.”

Wang also said on Wednesday the U.S. had “twice imposed restrictions on Chinese diplomatic personnel in the U.S. without cause,” last October and this June.

On Wednesday, China confirmed the U.S. abruptly requested on Tuesday that China close the consulate in Houston within 72 hours, sending bilateral relations to one of the lowest levels since diplomatic ties were normalized in 1979.

China’s Embassy in the U.S. described the move as “political provocation,” and urged the U.S. to “immediately revoke this erroneous decision.” “Otherwise, China will have to respond with legitimate and necessary actions,” said its statement Thursday.

U.S. President Donald Trump said Wednesday it was “always possible” that other Chinese embassies could also be closed. “We thought there was a fire in one that we did close,” he said. “I guess they were burning documents, or burning papers, and I wonder what that’s all about.”

His remarks referred to a fire reported in the Chinese consulate in Houston Tuesday evening. Local police said it was caused by people burning classified documents in the consulate’s courtyard, according to local TV station FOX26.

The Chinese Consul General for Houston Cai Wei said in an interview with ABC13 the burning of documents was a standard protocol for closed consulates.

Cai said he was “quite surprised” when hearing the news on Tuesday afternoon and “never expected to be treated like this.”

“We are coming for friendship, and for mutual understanding between China and the United States” he said

While the reason for the forced closure remains unclear, U.S. State Department spokesperson Morgan Ortagus said in an email statement Wednesday the Chinese consulate in Houston was ordered to close “in order to protect American intellectual property and Americans’ private information.”

But such U.S. accusations were “groundless fabrications,” said the Chinese embassy. “The excuses it cites are far-fetched and untenable. For the U.S. side, if it is bent on attacking China, it will never be short of excuses.”

In response to rumors the Houston Consulate was closed in retaliation for China’s refusal to help the U.S. Consulate in Wuhan reopen, Wang said Thursday the consulate in China’s former epicenter of the coronavirus had been operating since June. On Jan. 25, Washington withdrew all personnel from the consulate as Covid-19 broke out.

David Stilwell, who oversees policy for East Asia and the Pacific at the U.S. State Department, told the New York Times on Wednesday China’s Houston consulate “has a history of engaging in subversive behavior” and served as the “epicenter” of research theft by the Chinese military.

Stilwell also accused Consul General Cai Wei and other diplomats of fabricating identification to fly some Chinese citizens home. But Cai said he was simply escorting Chinese students onto a chartered plane and giving them masks.

The FBI said the Chinese Consulate in San Francisco had been harboring a Chinese researcher charged with visa fraud for hiding her relationship with the Chinese military for a month, according to the court filings released on Monday.