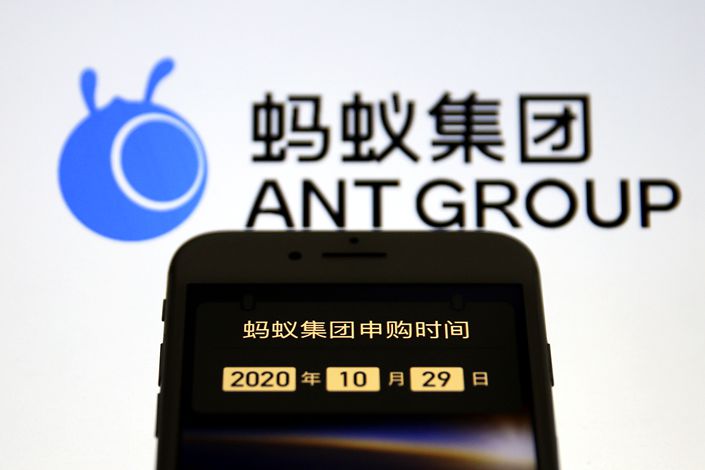 More than 1.55 million mom-and-pop investors subscribed to the Hong Kong part of the offering by Friday

That’s because even though refunds on share prices are expected, investors may still be stuck paying commission fees and interest on borrowed funds, according to Zhang Zhiwei, chief executive officer of Prudential Brokerage Ltd. in Hong Kong.

“I was hoping to make some money by investing in Ant Group, but now I am losing money,” said a Hong Kong retail investor who subscribed for the stock.

Such hopes for more than a million small investors evaporated when the Shanghai Stock Exchange Tuesday night slammed on the brakes for the fintech giant’s listing on the bourse’s STAR Market, citing changes in the regulatory environment. Shortly afterward, Ant Group said its IPO in Hong Kong would also be suspended. The abrupt freeze took place almost on the eve of the stocks’ debut scheduled for Thursday.

Ant’s $34.5 billion listing was set to be the world's biggest ever and stoked a buying frenzy among investors. More than 1.55 million mom-and-pop investors subscribed to the Hong Kong part of the offering by Friday, putting up HK$1.3 trillion ($168 billion) for the shares. The Shanghai retail portion was more than 870 times oversubscribed with total sales of a record 19 trillion yuan ($2.8 trillion).

Ant Group apologized to investors in a statement Thursday night and pledged to handle the follow-up issues properly according to exchange rules. In a separate filing with the Hong Kong exchange, the company said it will soon release details about refunds to investors.

Prudential Brokerage’s Zhang said investors who paid to subscribe for Ant Group’s shares in Hong Kong would be able to get refunds Wednesday but will have to bear the financial costs such as commissions and loan interest.

Amid the Ant investor buying frenzy, financial institutions raced to offer commission-fee waivers and cheap loans. A local newspaper reported that institutions in Hong Kong loaned as much as HK$519.2 billion to Ant Group IPO investors. Financial institutions offered low interest rates of 0.5% to 4% annually, leading to interest costs for investors totaling HK$36 million to HK$284 million for the five days before the scheduled debut, according to a Caixin calculation.

A filing by Shenwan Hongyuan Securities with the Hong Kong exchange Tuesday evening showed that the brokerage house loaned HK$1.2 billion at an annual interest rate of 3.2% to Grand Thrive Group Ltd. to fund its investment in the Ant Group IPO. The company also loaned HK$1.7 billion to an individual client identified as Pan Jian for the same investment purpose, the filing showed.

A person close to the matter said the Hong Kong exchange was set to issue final approval of Ant Group’s share sale in the city Tuesday afternoon, but the plan collapsed after the Shanghai exchange announced the suspension.

A spokesperson at the Hong Kong bourse said the exchange was informed by Ant Group of the decision to postpone the offering, without further comment.

The Shanghai stock exchange said the offering was halted as the regulatory interview and changes in the financial technology regulatory environment “may result in your company not meeting the conditions for listing or meeting the information disclosure requirements.”