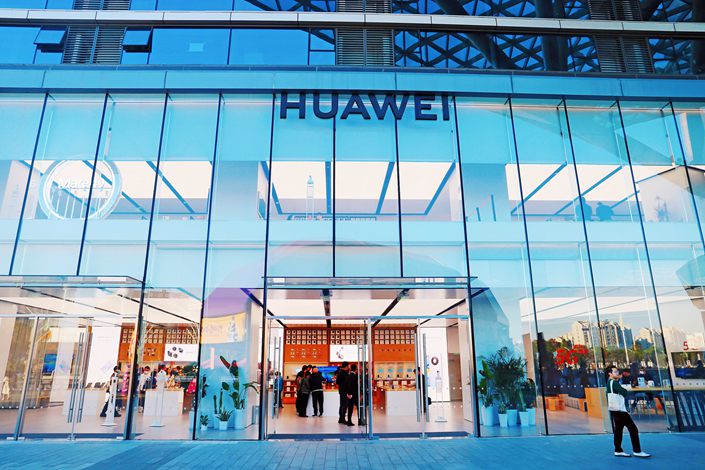 A Huawei store in Shanghai on Oct. 25.

Sweden’s telecoms regulator has halted a national 5G spectrum auction after a court allowed Huawei’s appeal against its exclusion from the next generation network.

The Sweden Post and Telecom Authority (PTS) informed the four bidding telecom operators — Hi3G Access, Net4Mobility, Telia Sverige and Teracom­­ — of its decision to put off the event, scheduled to start on Nov. 10, it said in a Monday statement. Allowing carriers to use the Chinese telecom- equipment maker’s low-cost equipment could change the bidding calculus, observers said.

The change of plan follows a ruling by the Administrative Court in Stockholm on Monday to indefinitely reverse the PTS’s previous ban on Huawei from participating in the nation’s 5G rollouts.

Huawei’s smaller peer ZTE Corp., which was subject to the same restriction, was not a party to the legal action. The company has made no official comment on the ban or the reversal.

“The decision affects Huawei’s rights in such a way that the company has the right to appeal the decision,” the court said in the ruling (link in Swedish), prohibiting the PTS from carrying out the ban on Huawei for the time being “as the outcome of the case may currently be considered uncertain.”

The PTS requested all bidding companies to remove technologies supplied by Huawei and ZTE from their existing infrastructure by January 2025 in a statement on Oct. 20, citing national security risks.

It said the decision was based on assessment work by the Swedish Armed Forces and the Swedish Security Services to ensure the use of foreign radio equipment does not “cause harm to Sweden’s security.”

Huawei filed a legal appeal to the Administrative Court last week seeking a temporary injunction to stop the ban from taking effect.

“There is no factual evidence and lawful reasons to justify PTS’s decision,” Huawei said in a statement on Saturday, adding that it is open to cooperation with local telecom operators and the PTS to meet safety standards for 5G infrastructure.

The four Swedish companies had been approved to participate in the auction for 3.5 GHz and 2.3 GHz bands as part of the broader 5G network. Net4Mobility is a joint venture between Tele2, Sweden’s second largest telecoms operator, and Norway’s state operator Telenor, both of which previously have used Huawei’s equipment.

Swedish ban is similar to that of the U.K., which earlier this year announced a purge of Huawei from its 5G mobile network by the end of 2027.

The U.K.’s National Cyber Security Centre pushed for the blanket ban after concluding that Huawei would need a major supply chain reconfiguration as a result of U.S. sanctions that cut off its access to crucial technology, and had no adequate alternative options.

China has warned Sweden that it should revoke the ban on Huawei to avoid negative impacts on its companies’ operations in the China market. The East Asian nation was the European nation’s eighth largest export destination in 2019, according to Sweden’s official statistics agency.

China has been opening its market to European corporations, including those from Sweden, foreign ministry spokesperson Zhao Lijian said in a press briefing last month. He said the Swedish government had “used national security as a pretext to smear Chinese companies without any evidence… [and to] politicize normal economic cooperation… [in] violation of international trade and investment rules.”

The broader efforts in European countries to exclude Huawei and ZTE from their 5G mobile network rollouts would most likely benefit telecom vendors, Swedish Ericsson AB and Finnish Nokia, according to market observers.

The PTS said it will continue to review the possibility of starting the auction as soon as possible.

“We can’t change the fact that we are an international company that was founded in China,” Kenneth Fredriksen, Huawei’s executive vice president for Central East Europe and the Nordic region, said on the matter before Huawei’s appeal to court, “however we can change the assumptions and false information about Huawei, with open and transparent communication.”