The Future of Agriculture Arrives in China, On the State’s Dime 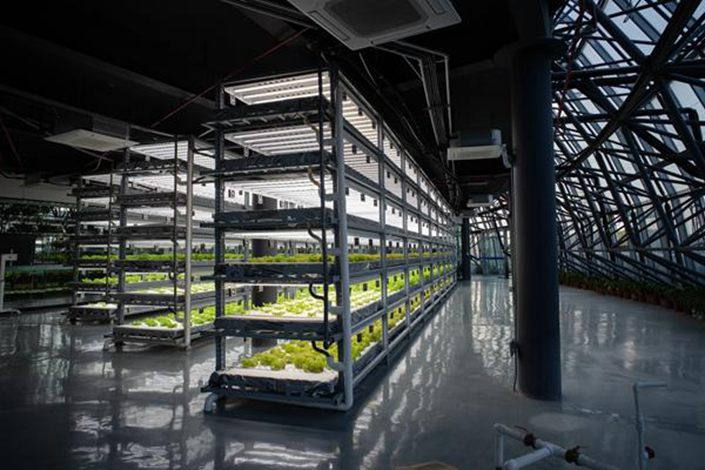 At a hydroponic plant factory in Donghai, the light, water, and nutrients needed for growth are all artificially controlled.

The Chinese government is increasingly focused on securing food for the nation’s 1.4 billion mouths, even as urbanization sucks more young workers out of agricultural centers in search of better paying jobs and brighter opportunities elsewhere.

Enter “smart agriculture.” It’s no gimmick — new technologies promise to quietly transform agriculture in China and beyond, as farmers gain the power to control the minutest elements of cultivation and need fewer hands to do it. Think sensors that read and set carbon dioxide levels, “hydroponic factories” that grow fruit on floating assembly lines, and combine harvesters that drive themselves.

Chinese policymakers have left little ambiguity about the importance of smart agriculture, and high-level policy support and generous state subsidies are helping nurture it. But below the surface, high costs and the difficulties finding a market for value-added goods among China’s price-conscious consumers mean the business case often struggles.

If the state stops feeding the sector, will it grow?

Caixin visited the International Agricultural Cooperation Demonstration Zone of Donghai county, in Jiangsu, where a hydroponic self-planting farm is in advanced development.

A giant glasshouse of some 2,000 square meters (2,150 square feet) holds eight groups of ponds filled with a nutrient-rich solution. Transplanter arms plant seedlings on a floating board, which is carried to the ponds along a track. When each plant grows to a designated size, they are pushed to the edge of the pool, where they are automatically harvested.

At least, that’s the idea. “We continue to run into issues,” says Chang Shaoping, head of design on the project, which is run by Zhonghuan Yida Facilities Horticulture Technology Co. Ltd. “For instance, the pool is big, so the temperature and the Ph value of the north and south ends might differ. Where should we put the sensor? These questions take time to answer in practice.”

In theory, high-tech hydroponic solutions like the one in Donghai can be replicated in places with harsh climates or which lack arable land. Some proponents are even more ambitious, saying they could spell the end of food security issues and even end human conflicts over land.

But right now, the more pressing issue is the business case. How can companies scale up their output, improve the quality of the produce, reduce energy consumption and input costs, and actually find a market in a country where vegetable and fruit prices are generally low?

“Right now, since this is still a government-led project, its main role is as an exhibit,” Chang tells Caixin. “The startup costs of the project are extremely high, and it is difficult to carry out without moderate subsidies.”

It’s late October, and the rice fields of Jiangsu’s Changyinsha Agricultural Demonstration Zone are golden and ready for harvest.

Chen Guoying, 79, has brought her family to the fields to watch as two unmanned combine harvesters pick the crop. Chen tells Caixin she worked here in the 1960s as a mechanic, back when it was a factory making agricultural equipment. A combine harvester was manned by three people back then, she says — a driver, one worker to collect the harvested rice in bags, and another to tie the bags and throw them to the edge of the field.

The demonstration starts with two young technicians driving the harvester around the rice field, before they both jump off of the machine and switch to remote control, using a device about the size of a mini iPad.

The harvester calculates the best path, and then gets to work. Compared to a skilled driver, it’s a bit clumsy, turning awkwardly, but it seems to travel the route efficiently and with precision. The technology also promises to protect workers from dust and noise pollution.

Fengjiang Intelligent Technology Co. Ltd., the company that makes the harvesters, says it has received hundreds of millions of yuan worth of orders for its intelligent farm equipment. But despite potentially saving labor costs and improving efficiency, sales of its devices are heavily reliant on state support, like many aspects of the smart agriculture boom.

“Frankly speaking, if there are subsidies, it will sell well,” a Fengjiang salesperson told Caixin.

Also on display in Changyinsha were pieces of digital farm equipment that could monitor soil conditions, keep an eye on pests and check the weather in real time. But Caixin found that in the control room, aside from a computer that remotely controlled irrigation, the devices didn’t work.

“To be honest, these are pretty old,” said one of the people in charge. “They were installed in 2012, and you need to continually upgrade smart devices. If you can’t keep up with the costs, you fall behind.”