By Ding Jie and Timmy Shen 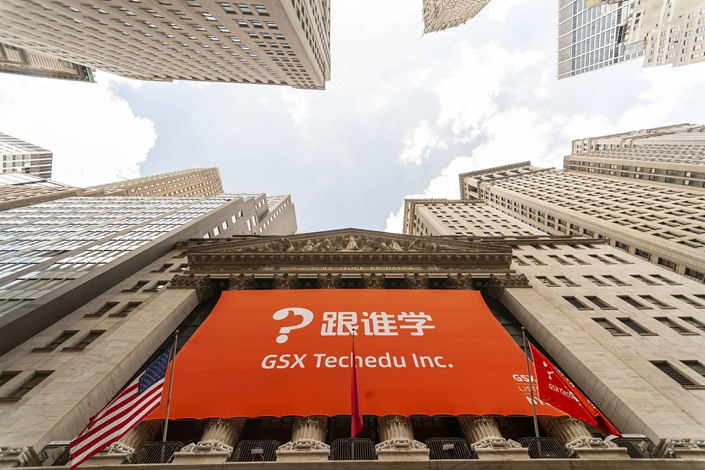 After-school tutoring services provider Puxin Ltd. plans to sell its online school business to competitor GSX Techedu Inc., which has made headlines in recent months after attacks by high-profile short sellers prompted a probe by the U.S. securities regulator.

Both of the New York-listed firms have struggled to turn a profit amid intense competition for market share in China’s online education sector. Despite the online school seeming to be a strong revenue driver, Puxin said in an internal notice circulated online that the goal of the divestiture is to implement a profitable development strategy and boost the company’s K-12 brand and business.

The two companies have yet to disclose information related to the deal. A GSX source told Caixin that the two are in talks.

Puxin, which is known for gobbling up other education firms and integrating them into its existing operations, is signaling that it will abandon a plan to merge its online and offline businesses that was aimed at improving profitability.

As recently as August, Puxin had touted its “online-merge-offline” (OMO) plans as a growth driver, with its chairman and CEO Sha Yunlong saying in the company’s second-quarter report: “We plan to further implement our K-12-oriented Online-Merge-Offline strategy and target to maintain a robust growth.”

That strategy had appeared to be working, with Puxin’s online education services providing Puxin Online School 24 million yuan ($3.6 million) in net revenue for the second quarter of this year, an 8-fold year-on-year increase.

But Puxin didn’t disclose whether its online school was able to turn a profit, and its decision to sell the unit suggests it may not have provided the boost the company had hoped. A securities analyst told Caixin that it’s generally difficult for online schools to earn a profit, and that good revenue performance doesn’t necessarily translate into high profits.

The company is not an online education specialist, and the bulk of its business comes from offline education services. It used funds raised from its June 2018 U.S. IPO to expand into the online education sector, rolling out online classes for elementary and junior high school students in November of that year.

While Puxin’s online tutoring business expanded rapidly, growing from less than 7% of enrollments in 2019 to 38.1% of total enrollments in the first quarter of this year, the company may have decided that maintaining a presence in the fiercely competitive online education sector could have been too costly. It posted a net loss of 433.4 million yuan in the first half of 2019 as it expanded the service.

On Oct. 21, the U.S. stock of GSX plummeted 31% to $71.23 per share after Credit Suisse AG downgraded its stock to an “Underperform” rating from “Neutral.” Following the Puxin acquisition news, GSX stock closed up 1.6% on Tuesday at $70.34.