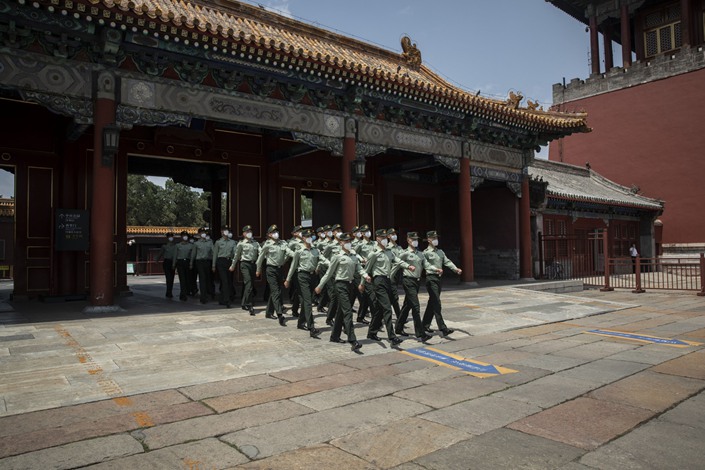 (Bloomberg) — President Donald Trump signed an order prohibiting U.S. investments in Chinese firms determined to be owned or controlled by the country’s military, the latest bid by the White House to pressure Beijing over what the president has described as abusive business practices.

China is “increasingly exploiting” U.S. capital for “the development and modernization of its military, intelligence, and other security apparatuses,” posing a threat to the U.S., according to the executive order, signed on Thursday.

Relations between the U.S. and China have deteriorated following the signing of a trade deal early in the year. Trump also has repeatedly vowed to punish Beijing over the coronavirus pandemic, its treatment of Muslim minorities and the crackdown on dissent in Hong Kong. Chinese officials have threatened to retaliate with their own blacklist of U.S. companies.

Shares of top Chinese firms — including China Mobile Ltd. and China Telecom Corp. Ltd. — tumbled Friday on reports of the impending decision. The executive order will prohibit U.S. investment firms and pension funds from buying and selling shares of 20 Chinese companies designated by the Pentagon as having military ties in June, as well as an additional 11 companies added in late August.

The prohibition will go into effect on Jan. 11, and allows U.S. investment firms and pension funds to divest their holdings in companies linked to the Chinese military over the next year. If the U.S. determines additional companies have military ties in the future, American investors will be given 60 days from that determination to divest.

U.S. National Security Advisor Robert O’Brien said in a statement that many of the companies at issue are traded on exchanges around the world. American investors can unknowingly provide funds through passive investments such as mutual funds and retirement plans, he added.

The order “serves to protect American investors from unintentionally providing capital that goes to enhancing the capabilities of the People’s Liberation Army and People’s Republic of China intelligence services,” O’Brien said.

In a move earlier this year to restrict the flow of money, the administration sent a letter to Michael Kennedy, then chairman of the Federal Retirement Thrift Investment Board, telling him to “halt all steps” associated with putting government employees’ savings in a fund that includes stakes in Chinese companies.

Separately, O’Brien on Wednesday said China’s latest clampdown in Hong Kong shows that the one country, two systems arrangement for the territory amounts to a “fig leaf” for dictatorship, and warned of new sanctions.

The warning came after China’s top legislative body on Wednesday passed a resolution allowing for the disqualification of any Hong Kong lawmakers who were not deemed sufficiently loyal. Chief Executive Carrie Lam’s government immediately banished four legislators, prompting the remaining 15 in the 70-seat Legislative Council to resign en masse hours later at a joint press briefing.

While the U.S. has imposed sanctions against Lam and some officials in Beijing, it has so far held off punishing the country’s senior hierarchy. Such a move would infuriate Beijing and accelerate a deterioration in relations between the two nations on a variety of issues.