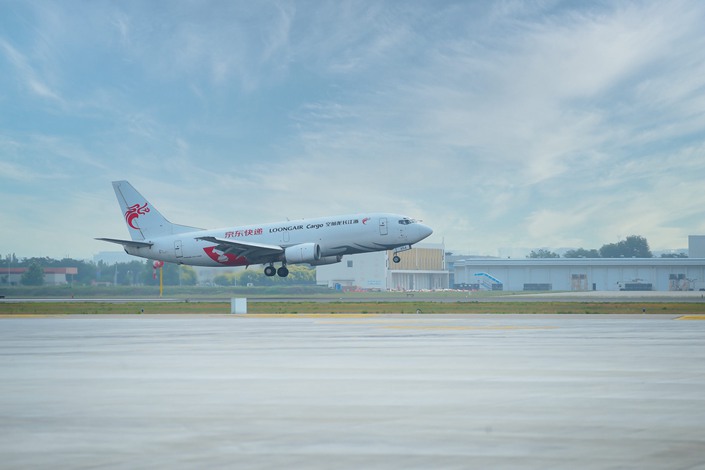 The logistics arm of China’s No. 2 e-commerce company JD.com Inc. has embarked on a new hiring spree for an air cargo unit set to be based in the city of Nantong near Shanghai, Caixin has learned, as it moves to further expand its transport capabilities.

Recent recruitment information seen by Caixin showed that JD Logistics was looking to fill more than 30 positions in job roles including aircraft reception, flight training, aviation materials management and aircraft maintenance. But the listings were deleted shortly after being posted, and JD Logistics had no comment on the situation.

JD Logistics is just one of several major units that the e-commerce giant has broken out for operations as separate companies. Other major units include its fintech division JD Digits, as well as JD Health International, which is currently getting ready to make a Hong Kong IPO, raising up to $2 billion. Among the units, JD.com founder Richard Liu had said as recently as April last year that JD Logistics was losing big money, and could go bust in the near-term unless its situation improves.

JD Logistics has contemplated launching an air cargo unit for a while, and has already established an aviation department internally, a source close to the company told Caixin. That plan began to take more concrete form at the end of 2018, when the company signed a framework agreement with the city of Nantong, which lies north of Shanghai across the Yangzte River.

JD Logistics registered an aviation logistics company in Nantong in September 2019, and earlier this year the operator of Nantong’s airport acquired 25% of the new company’s shares. However, the new company has yet to submit an application to China’s aviation regulator for a cargo license — a necessary step before it could actually enter the business.

China’s latest regulations stipulate that air cargo companies must have at least three planes, as well as necessary resources and skilled labor.

JD Logistics currently has no self-operated cargo planes and currently fills most of its aviation needs with partners. It previously considered investing in the air cargo operations of some of the nation’s big state-owned carriers as part of a Beijing-led program to bring outside investment to big state-owned enterprises, the source told Caixin. But nothing ever came of those efforts, the source added.

One such plan made headlines earlier this month, when Beijing-based Air China announced it would sell 31% of its air cargo business for 4.8 billion yuan to a group including e-commerce giant Alibaba Group Holding Ltd.’s Cainiao logistics unit and Shenzhen International Holdings Ltd.

One of JD Logistics’ chief rivals in the aviation space will be S.F. Holding Co. Ltd., which is developing its own 37.3 billion yuan air logistics hub in the Central city of Ezhou in Hubei province. That project is expected to start operations at the end of 2021 or in early 2022. S.F. already operates 61 aircraft under its air freight unit, making it the largest operator in China.

Another logistics company, YTO Express Group Co. Ltd., announced in June it had signed a deal to develop a 12.2 billion yuan air logistics center at the airport in the city of Jiaxing, also near Shanghai. But it didn’t provide any timeline for that project.