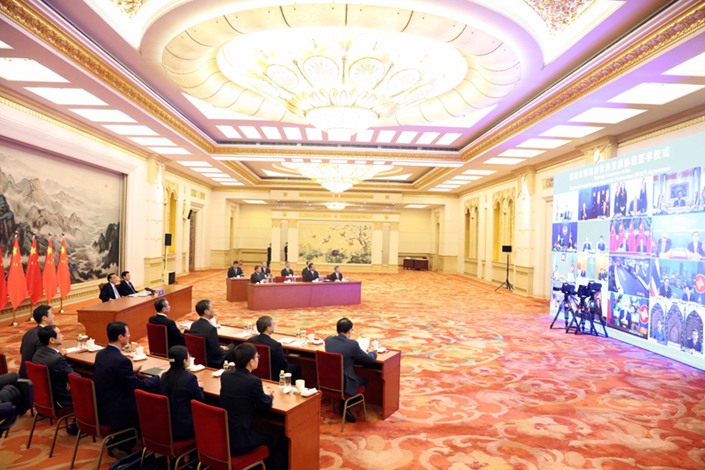 Official data shows that the total volume of trade between China and the other 14 RCEP members reached $1.55 trillion in the first three quarters of 2020. Photo: State Council

The Regional Comprehensive Economic Partnership (RCEP) signed on Sunday has created the world’s largest free trade zone and is set to optimize the economic integration of the 15 Asia-Pacific member countries.

The agreement aims to reduce tariffs to zero for more than 90% of goods trade between 10 Southeast Asian countries and five Asian nations including China, Japan and South Korea. China’s Ministry of Commerce also said its RCEP commitments liberalize trade in services to the same level as its most generous existing free-trade agreements, opening up 22 new sectors including consulting and air transportation.

It covers a wide range of areas, comprised of a preamble and 20 chapters, with four overarching objectives including establishing a “modern, comprehensive, high-quality and mutually beneficial economic partnership framework.”

While the RCEP text is “riddled with exceptions, exclusions, long transition periods, and non-enforceability of many chapters” according to Wendy Cutler, vice president of the Asia Society and a former trade negotiator at the U.S. Trade Representative Office. “Nevertheless, it should be taken seriously. It will strengthen regional supply chains and economic integration of the 15 members,” Cutler said in a post on Twitter.

Promoting further integration of the member economies through common rules and lower tariff rates, RCEP “solidifies bonds between trade negotiators and ministers, from Beijing to Jakarta to Wellington, which will carry over to other fora and initiatives,” she wrote in a blog post.

Peter Petri, a professor of international finance at Brandeis University in Massachusetts, said that simulations show RCEP could add $209 billion annually to world incomes, and $500 billion to world trade by 2030.

“The new agreements will make the economies of North and Southeast Asia more efficient, linking their strengths in technology, manufacturing, agriculture, and natural resources,” Petri wrote in a blog.

According to the Washington-based Institute for International Economics, RCEP could bring a $186 billion increase to global GDP, $39 billion more than the Comprehensive and Progressive Agreement for Trans-Pacific Partnership (CPTPP), another mega trade pact in the region of which China is not a member.

RCEP is expected to boost the 15 member states’ exports, foreign investment and GDP by 10.4%, 2.6% and 1.8% respectively in the next five years, according to China’s commerce ministry.

Within the RCEP, there are also special trade rules and arrangements between China and Japan, and between Japan and South Korea, which are meant to support the ongoing negotiation of a China-Japan-South Korea free trade zone.

Official data shows that the total volume of trade between China and the other 14 RCEP members reached $1.55 trillion in the first three quarters of 2020.