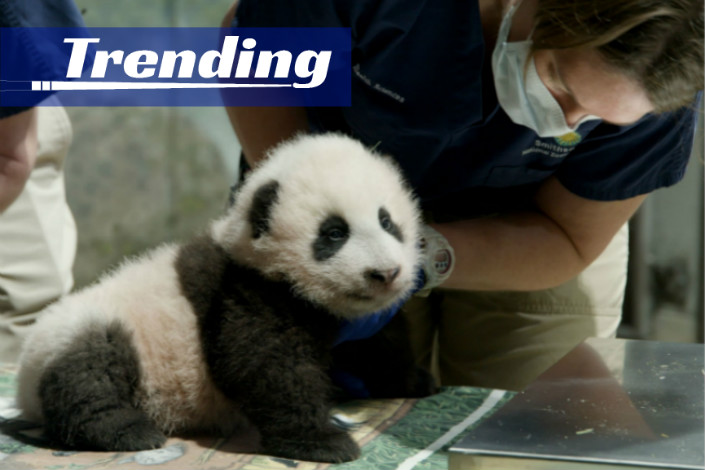 A giant panda cub born in Washington D.C.’s National Zoo to 22-year-old Mei Xiang in August was named according to tradition on his 100th day. On Monday, following an online poll in which almost 135,000 people participated, the cub was given the name Xiao Qiji (小奇迹) or “Little Miracle.”

The choice of name possibly refers to the exceptional circumstances of his birth at the height of the Covid-19 pandemic to an older panda inseminated with her mate Tian Tian’s frozen sperm. Chinese Ambassador to the U.S., Cui Tiankai, said the furry ambassador had again brought the Chinese and American people together. Little Miracle can be seen crawling around the panda enclosure 24 hours a day on the zoo’s dedicated panda-cam. His birth was also livestreamed.

All pandas abroad are the possession of China, and once Xiao Qiji is 4 years old, he will return to China according to the conditions under which his parents were loaned to the zoo. Pandas are thought to boost zoos’ visitor numbers and revenue. In 2013 the Royal Zoological Society of Scotland estimated that its overall income jumped by more than £5m to nearly £15m in a single year, following the arrival of two pandas from China in late December 2011. For Little Miracle to perform the same feat for the U.S. National Zoo during the pandemic may require a larger miracle.

The news was greeted with many Weibo users calling for Little Miracle’s mother, Mei Xiang, to be returned to China, as encouraging such an elderly panda to give birth was “irresponsible” of the American zookeepers. The most popular comment under the naming story was, “Let’s hope the 80-year-old mother of one of the zookeepers gives birth, as that would be a real miracle.”

Another said, “Mei Xiang is being abused, risking pregnancy at that age. We shouldn’t let her be sacrificed to international relations. Let her come home to peacefully live out her days.”

In the age of selfies and beauty filters one panda-cam fan asked if the image of Xiao Qiji had been whitened for the story.