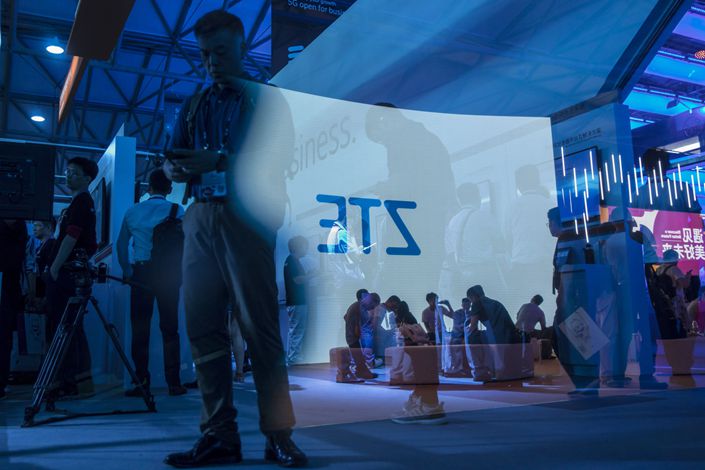 The ZTE Corp. logo projected on a screen is reflected on a pane of glass at the Ericsson AB booth at the Mobile World Congress Shanghai on June 28, 2018. Photo: Bloomberg

(Bloomberg) — The U.S. Federal Communications Commission affirmed its decision to designate ZTE Corp. as a national security threat over concerns telecommunications gear made by the Chinese company could be used for spying.

The action shows that the FCC remains determined to drive ZTE and fellow Shenzhen-based manufacturer Huawei Technologies Co. from the U.S. market, where small rural carriers rely on their cheap network equipment. The agency at its Dec. 10 meeting is to consider rules for listing prohibited gear, FCC Chairman Ajit Pai said in a Nov. 18 blog post that identified Huawei as a threat.

The FCC has said ZTE and Huawei pose a risk of espionage, an allegation each company denies. The agency has increasingly scrutinized Chinese companies amid tensions between Beijing and Washington over trade, the coronavirus and security issues. The FCC is considering banning three Chinese telephone companies, and last year barred China Mobile Ltd. from entering the American market.

The FCC on June 30 designated both companies as national security threats, and ZTE asked the agency to reconsider its listing. The company said it supplies safe and secure equipment and is “clearly and fully dedicated to complying with all applicable laws in the United States.”

Pai in an emailed statement called Tuesday’s rejection of ZTE’s request “another important step in our ongoing efforts to protect U.S. communications networks from security risks.”

ZTE didn’t dispute that Chinese law obligates its companies “to provide access, cooperation, and support for the government’s intelligence gathering activities,” Pai said in a tweet.

Huawei wasn’t mentioned in the FCC news release. The company has separately asked the agency to review its designation, and the FCC is taking comments until Dec. 11 after Huawei filed more than 5,000 pages of documents.

The FCC’s action means money from federal subsidies that help underpin many small rural carriers may no longer be used to buy or maintain equipment produced by the companies.

The FCC has asked Congress for money to help the companies remove suspect gear and replace it. Pai renewed the plea on Tuesday.

“Now it is more vital than ever that Congress appropriate funds so that our communications networks are protected from vendors that threaten our national security,” Pai said in the news release.

Several dozen rural carriers accept the subsidy and use equipment from Huawei or ZTE, the FCC has estimated. It said the average cost for a firm to replace the equipment may range from $40 million to $45 million.

Some Chinese investors expect that President-Elect Joe Biden will tone down anti-China rhetoric heard from the White House under President Donald Trump, but not change what’s now a bipartisan view in Washington of Beijing as a strategic rival.