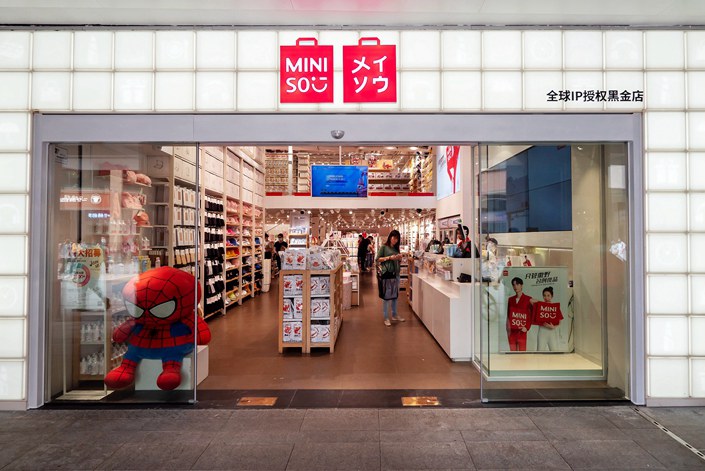 (Nikkei Asia) — The Parisian district known as the 8th Arrondissement is famous for the showcase luxury stores of the Avenue des Champs-Elysees.

China’s Miniso Group is hardly in their league. Yet last month, fresh on the heels of its successful $608 million initial public offering in New York, the first French outlet for Miniso’s signature mix of cheap but trendy household goods opened in the district under a franchise deal with Jonathan Siboni, head of a local luxury retail consultancy.

“I was set on bringing this popular brand to the French market the moment I saw their stylish yet affordable products, together with their advanced store management,” Siboni said in an accompanying announcement.

With 2,533 stores already open across China as of June, Guangzhou-based Miniso Group is counting on foreign markets to help drive future growth for its brightly lit stores which offer an eclectic range of discretionary goods from cartoon-character neck pillows to earphones and notebooks.

Miniso, which is backed by Chinese internet company Tencent Holdings Ltd., has entered 80 overseas markets since venturing into Hong Kong in 2014, a year after its founding, but aims to reach 100 on the way toward raising chainwide annual sales to 100 billion yuan ($15.2 billion) by 2022.

Such sales totaled 19 billion yuan in the fiscal year ended June 30, with 8 billion yuan of that coming from overseas. The combination was enough to make Miniso the world’s largest “global branded variety retailer,” according to Frost & Sullivan market research cited in the chain’s IPO prospectus.

In an announcement this week, Miniso hailed its upcoming entry into Italy and Iceland and noted a flurry of openings in Spain had helped bring the total number of new store launches since the IPO to 100.

Yet Miniso’s growth model is showing strains. Clashes with franchisees have seen the company retreat from several countries this year and tensions also drove the company’s Canadian affiliate into creditor protection last year. Amid the Covid-19 pandemic, the group’s Australian affiliate sought court protection while the company quietly abandoned Germany.

Factoring in rising competitive pressures at home in China as well, some are questioning whether the self-described Japanese-inspired lifestyle product retailer can achieve its targets.

“Similar-sounding brands selling similar-looking products — personal and home accessories, sourced from China — are available at local malls across Asia,” wrote Devi Subhakesan, an analyst with stock research company Investory in Singapore in a report on the Smartkarma research platform.

“Miniso’s products lack dollar-store products’ appeal of functionality,” she added. “Nor does it have the durability of Muji products,” she added, referring to the Japanese retailer Miniso has been accused of copying from.

“Without addressing a specific buyer need, nor having a strong brand, it [Miniso] is at risk of getting shunned by its trend-conscious customer base — mostly young women with limited spending power — when the next ‘cooler’ looking product arrives in the market.”

For the moment, Miniso is still finding new customers to excite.

Shah Rayeed Chowdhury, director of family-owned textile maker Evince Group, has opened 12 Miniso shops over the past two years under the franchise he holds for Bangladesh. He aims to open eight more by March.

“In Bangladesh, the retail market for lifestyle products is growing,” Chowdhury told Nikkei Asia. “There was no such chain in Bangladesh and Miniso’s prices were affordable.”

In some Asian markets, Miniso has taken sales away from Daiso, an older Japanese discount household goods chain.

“Miniso’s plush toys and towels are of better quality than Daiso’s,” said Evelyn Tan, a building surveyor in Kuala Lumpur.

“We believe there is long-term growth potential in overseas markets through store count growth in existing geographies as well as through expansion to new countries,” he wrote in a note published on Smartkarma.

“The company has already proven that it is capable of profitably expanding into 80 countries across various continents,” Kumarasiri said. “Furthermore, the business model used in overseas expansion is easily scalable and the company’s efficient supply chain provides competitive pricing, even in overseas territories.”

Miniso owns few stores itself, with the bulk run under a form of management contract or a franchise model. But while it has full control of just 0.3% of Chinese Minisos, it owns 7.2% of the 1,689 stores that were open overseas as of June. These are concentrated in North America and India.

Goldman Sachs projects that average annual overseas revenue growth will run at 30%, almost double the rate of Miniso’s domestic business, through June 2023, with the chain’s international store count rising to 2,839 by then and overseas stores topping domestic outlets in average sales.

International markets contributed a third of the company’s overall revenue of 8.98 billion yuan last year. Of that total, 80.9% came from supplying products to store operators.

Even in growing markets like Bangladesh, though, competitors are nipping at Miniso’s heels.

Fakir Apparels, a knitwear producer, in June opened an outlet in Dhaka of Yoyoso, a “Korean-inspired” chain from China offering a similar range of goods to Miniso. Fakir plans to open at least 10 more shops under its franchise.

Any challenger that can beat Miniso on pricing is likely to quickly lure away a share of its customers.

Hasan Murad, a businessman from Chittagong who was visiting a Dhaka outlet, bought perfume and earrings for his wife but balked at dolls for his daughter. “Many products I like are not affordable,” he said.

Under the twin pressures of competition and Covid-19, Miniso’s per-store revenue fell 19.8% to 2.2 million yuan in the year ended in June.

While the pandemic has disrupted shipping and thus affected Miniso’s ability to keep its global store network well-stocked with goods from China, inventory was already an issue in some places before Covid.

Local press reports from South Africa, where Miniso had 19 shops, tell of store operators unable to keep their shelves filled with requested goods starting from late 2018.

Store owners took Miniso to court but it ultimately sold off its South African business, along with its operations in Nigeria, Uganda and Tanzania, to Ye Guofu, Miniso’s chairman and chief executive, earlier this year for the nominal sum of 7 yuan, according to the company’s IPO prospectus. Its Kenyan business was sold to another buyer for 1 yuan.

After disputes with its Canadian affiliate, Miniso successfully petitioned a judge there to put the unit into court-supervised restructuring last year at a time it had 48 stores in operation. In its prospectus, Miniso said its Canadian distributor “engaged in fraudulent activities and caused harm to our reputation, our business and results of operations.” A group of franchisees were reported to have filed suit against the company this year.

The nature of Miniso’s troubles in Germany is unclear. After arriving in Berlin in 2017, new Minisos were still opening as recently as last December but by this past June, all were having closing sales or shuttered. The German business was included in the 7 yuan sale to Ye.

In Australia, Miniso’s master franchisee sought court protection from creditors in July, with A$18 million ($13.24 million) in debt, after shopping centers went quiet due to the Covid-19 outbreak. Stores run by sub-franchisees, however, have remained open and Miniso still expects to add 15 stores to its current 30 in the country by the end of next year.

In India, a Delhi court in August censured the local operator for falling behind rent at one store, according to local media, but the company nevertheless opened a new outlet in the capital on Oct. 18.

Politics has been another source of trouble for Miniso, which declined to comment for this article.

Amid anti-government protests last year in Hong Kong that occasionally targeted Chinese companies and saw windows at one of its shops smashed on China’s Oct. 1 National Day, Miniso closed all 50 of its outlets in the city for a period. Protest supporters included Miniso on lists of shops to boycott for alleged support of police repression.

Months later, Mandy Wong, a marketing executive, still avoids Miniso. “This is a form of protest I can take part in every day,” she said.

A Miniso in Pyongyang has brought other headaches. Miniso was named in two U.N. reports for possible violation of the organization’s trade sanctions against North Korea.

Miniso said in its prospectus that its former trading partner in North Korea continued to use its brand without permission after August 2017, a few months after the store opened, even though the two ceased dealings with each other. The aborted venture has drawn attention from authorities in Hong Kong and Japan as well as bank compliance officials, the prospectus indicated.

Tensions between Beijing and both Delhi and Washington are another worry.

The prospectus notes measures India has taken against Chinese companies amid recent border clashes and warns Miniso could become a target. The offering document notes several potential complications in the U.S., including that it could be forced to delist its shares from the New York Stock Exchange by 2022 due to tightened requirements for Chinese companies.

Investors already appear to be cooling on Miniso. Its shares, which shot up as high as $24.90 on their debut day, closed Nov. 25 at $20, flat with their IPO price.