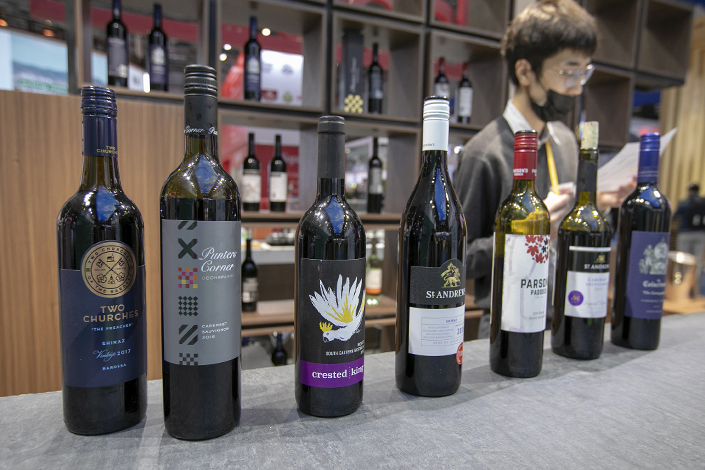 (Bloomberg) — Treasury Wine Estates Ltd. unveiled an emergency plan to find new markets for its best-known labels after China imposed crippling anti-dumping duties of 169% on its wine over the weekend.

In a statement Monday, Melbourne-based Treasury said demand in China will be “extremely limited” while the taxes are in place. All told, the company needs to find a new home for a quarter of its annual global Penfolds volume. The plan to diversify away from the world’s biggest buyer of Australian wine will take years to bear fruit.

Treasury shares plummeted as much as 12% in Sydney as investors digested the scale of the reorganization facing the wine producer, the latest corporate victim of an escalating political dispute between Australia and China. The duties follow a raft of other measures targeting Australian commodities from coal and copper to barley this year.

Australia’s largest listed winemaker had made China a central plank of its growth strategy by distributing a suite of luxury labels, spearheaded by Penfolds, to the wealthy and emerging middle class. The country represented approximately 30% of its total earnings last fiscal year.

Now, the company is reallocating the Penfolds Bin and Icon labels to other luxury markets including Australia, the U.S. and Europe. CEO Tim Ford said he’s also accelerating a drive to produce more wine in other countries such as France, and potentially China, to avoid the made-in-Australia duties.

The benefits of Treasury’s swiftly drawn-up response are likely to be limited during the fiscal year ending June 2021, and will yield maximum results over a two- to three-year period, it said.

The stock was down 5.7% at 11:32 a.m. local time, cutting the company’s market value to A$6.3 billion ($4.7 billion). Its shares tumbled 11% on Friday as China’s measures, which can stay in place until August next year, were announced.

One of Treasury’s challenges is redirecting China-bound wines without over-saturating other markets and sacrificing profit margins. In recent years, the company has focused on top-end labels and leaned less on mass-market brands, a strategy that delivered record profits and a soaring stock price under Ford’s predecessor, Michael Clarke. The company said Monday it will retain wine on its books for future release in order to balance demand with supply.

On a call with investors on Monday, Ford said Treasury would also need to address its cost base in China in light of the expected collapse in demand. He said Chinese demand for Penfolds would persist at some level, and Treasury has a “long-term commitment” to the market.

“We are extremely disappointed to find our business, our partners’ businesses and the Australian wine industry in this position,” Ford said. China is the biggest buyer of Australian wine, importing A$1.2 billion in the year through September, according to government marketing body Wine Australia.

“The uncertainty has been quantified,” said Jun Bei Liu, a portfolio manager at Tribeca Investment Partners in Sydney. “The bad news is well and truly reflected in the share price.” She said redirecting wines from China on the scale facing Treasury is “very feasible,” partly because the company has sold wine in the other markets for years, though now needs to hire more salespeople to do the work.

Australia is the world’s most China-dependent developed economy and finalized a free-trade agreement with Beijing in 2015. But relations have been fraught since 2018, when Canberra barred Huawei Technologies Co. from building its 5G network. They went into free-fall earlier this year when Morrison’s government called for an inquiry into the origins of the coronavirus outbreak, a move that bruised China’s pride and unleashed a torrent of criticism that Australia is a puppet of the U.S.

Australia has accused China of “economic coercion” and insists it won’t be cowed by the trade measures that are impacting a string of commodities also including timber, cotton and lobster. More than 50 vessels carrying at least $500 million in Australian coal are stranded near Chinese ports.

China says Australia has poisoned bilateral relations by interfering in its affairs.

Agriculture Minister David Littleproud said Monday that China’s actions risk undermining global confidence in the nation as a trading partner. “When countries go and abuse the rules and are not able to articulate quite clearly why they’ve taken an action” it “poses a risk to any nation that trades with them,” he said.