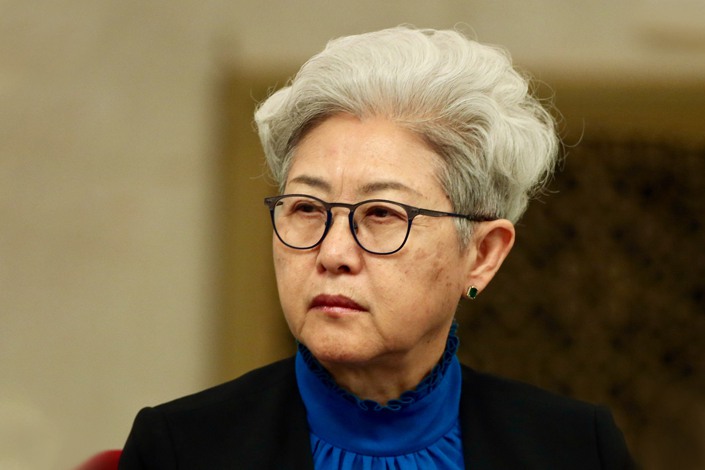 China’s former ambassador to Australia rejected the notion that the bilateral relationship is in a “deep freeze,” citing “robust and complementary” trade links and striking a conciliatory tone despite rising tensions.

Fu Ying, China’s ambassador to Australia from 2003 to 2007, told the Australian Financial Review newspaper in a written interview published on Monday that “China treasures its ties with Australia ... We believe that a sound and stable China-Australia relationship is in the interests of both countries.”

Rejecting some Australian media’s characterization of a “deep freeze” between Beijing and Canberra, Fu said that “co-operation between China and Australia has been robust, and the quick recovery in the bilateral trade after the outbreak of the pandemic is a case in point.”

One of China’s top diplomats, Fu is currently vice chairwoman of the foreign affairs committee at China’s top legislature, the National People’s Congress (NPC), and previously served as vice foreign minister from 2009 to 2013.

“The trade structure between China and Australia is determined by the complementary needs of the two countries. Australia is a country with rich resources while China has a huge demand for resources,” she was quoted as saying. China imports more than 80% of Australian iron ore, 75% of its wool, and 40% of its wine, according to the report.

Fu’s comments came as the bilateral relationship hit the rocks after Canberra excluded Chinese telecom giants Huawei and ZTE from its 5G networks over security concerns in August 2018, amid Washington’s global campaign to get other countries to follow in its footsteps.

Since then, tensions have risen further over a series of issues including trade disputes, espionage allegations and the media. In August, China initiated two trade remedy investigations into Australian wines. The same month, it detained an Australian journalist, Cheng Lei, over “criminal activity endangering China’s national security,” according to Chinese foreign ministry.

“I don’t believe the international community wants to be forced to take sides in a split world,” Fu said. “As a stakeholder, Australia would not want to face this choice either ... We also expect Australia to bridge the current divergence, not the opposite.”

Fu, who remains active in Chinese diplomacy around the globe, called for an end to the two sides’ ”confrontation and abusive language.” She also said that “(both) countries need to show their sincerity and courage to get out of the current dilemma,” according to the published interview.

These conciliatory comments coincided with similar remarks made by the current Chinese ambassador in Canberra, Cheng Jingye, urging that the two sides should ”insist on treating each other’s development as an opportunity rather than a threat, abandon the Cold War mentality, and continue to build trust and remove suspicion.”

Calling for “creating a fair, transparent and non-discriminatory business environment for companies from both sides,” Cheng said in a statement last week that “(we) hope that the Australian side could work with us to carry forward bilateral relations along the right track on the basis of mutual respect and benefit.”