Pascal Lamy: Regulators Should Work Together For Successful Data-Driven Globalization 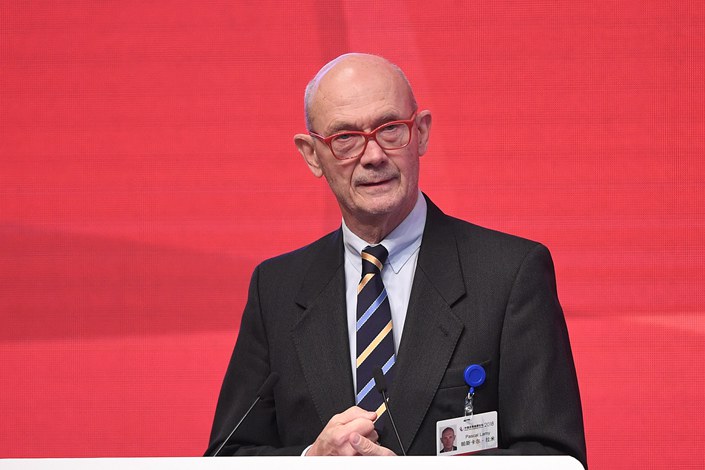 Pascal Lamy, former director-general of the World Trade Organization from 2005 to 2013, is chair of the Paris Peace Forum. This article was his speech delivered at the 2020 Global Digital Trade Conference on Saturday.

Whatever views we have about what the post-Covid world will look like, and there are many, one thing for certain is that the crisis will have accelerated the digitalization of our planet, a digitalization we knew about but which is again influencing international exchange.

We've moved progressively year after year in human history from exchanging goods to exchanging services. And in modern times, to exchanging data. This is a historic, extremely fast transformation and might obviously be difficult to track.

As the value of production systems moves from artifacts, things we make, to intangible things, which relate to information, the difference between a book and an e-book is a very difficult question to answer.

Yet we know that this flow of data is the main characteristic of the new reality we are in, even if how data transforms in euros, in dollars, or in Renminbi, remains, to be frank, a bit mysterious.

This is the new frontier of international exchange, regulation and openness. This is not unknown. For quite some time we’ve been adjusting regulatory standards, for safety, security, certification, pesticides, qualifications for nurses, and car emissions, etc. Yet, the world of data raises much more challenging issues.

As obstacles to trade in the world of data stem from different collective preferences about precaution, they translate into discrepancies in levels and administration of precaution. It becomes a sort of patchwork that hampers economies of scale, and risks increasing the north-south digital divide which we already know is a problem.

The differences in the way countries see safety and security precautions in data, or about infrastructure, telecommunications, internet, and data regimes, are about addressing cyber vulnerabilities.

This triggered an international conversation many years ago. The first WTO work program dates back to 1998 and has moved in the World Trade Organization into a negotiation, which is now going on.

But we've also seen other forms of trade relations, such as bilateral trade, entering into this issue of “how do you create the necessary rules so that trade can remain open?”

We have a rather strong disposition in this respect with the CPTPP in the Pacific region, we have a set of principles in the recently adopted RECP, and we have quite a lot of bilateral agreements, starting with what Singapore has launched with many countries, which are specifically devoted to opening trade in the digital area.

Now if we look at where we are in this international conversation, what I see is a few convergences and quite a lot of divergences.

We have a few convergences in areas like electronic contracts, online consumer protection, authentication of signatures, and in areas like payment safety.

On the other side, we have a lot of divergences on issues like data circulation localization, privacy protection, fiber security, internet neutrality, and software source protections where the preferences of countries diverge a lot. This is something which is here to stay.

In my view, these divergences are unlikely to be resolved in a level playing field comparable to what we had in the previous phase of globalization with goods and services.

And the reason why these divergences are unlikely to be resolved is because they relate too deep political, philosophical, cultural, and cognitive differences which are at the root of the differences in collective preferences.

The U.S. system is one where the ideology, the basis of regulation, is that data is merchandised and is what you can soon exchange at a price. The Chinese system is very different. It's one where data roughly is under state control.

And the EU system is one in which data is sort of a part of an individual, the part which people individually possess and is their property. Hence, this huge attention to data privacy which has led to the EU stance on the protection of personal data, the famous General Data Protection Regulation, which is now in force and imposes specific standards on people operating in or with the European Union.

This triangle is unlikely to shrink to a single point, and this is my last point, which is why we need to avoid an excessive fragmentation. We should not aim at convergence; contrary to the past, we should aim at organizing a proper coexistence.

There are three possibilities to get us there.

The first is through a medium which combines some single and valuable geometry for a digital rules-based change system in a pyramid shape. It has a large ground floor with least common denominator commitments for as many countries as possible and then moves upwards to the top for countries accepting a much deeper set of rules and commitment.

A second possibility would be to establish an interface between different systems. This is complex ― a combination of two systems with a sort of safe harbor.

So to conclude, I think this digitalization of international exchange raises problems which are much larger than trade and which trade negotiators have a hard time addressing because it's not where I give you something, you give me something, and then we're happy.

We must realize and acknowledge that the fundamental challenge of globalization in this coming phase of data-driven globalization is to find the right balance between competition and cooperation. And it is also about reinventing new rules for globalization. So, I hope that collectively we will be wise enough to address it so that this world of data does not fracture.