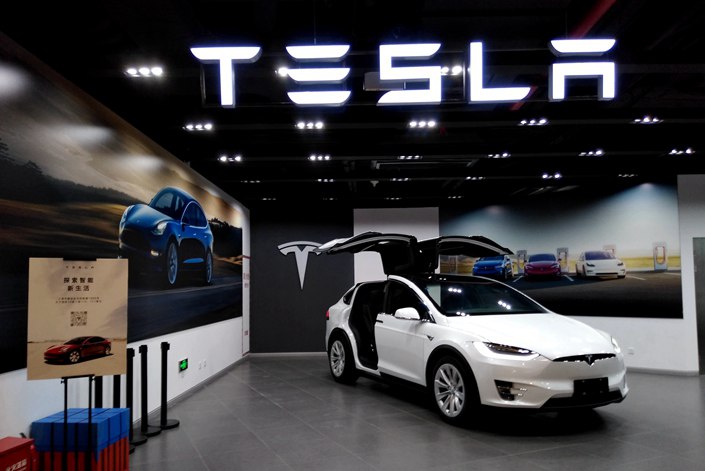 A Tesla dealership in Shanghai on Aug. 14.

Tesla Inc. plans to appeal a court order to compensate the buyer of a second-hand sedan after it was ruled the electric-car maker had covered up damage the vehicle sustained in an accident.

Beijing Daxing District People’s Court ordered Tesla on Friday to pay 1.14 million yuan ($174,509) — three times the price paid for the used vehicle — to compensate the buyer after it was found that parts of the vehicle had been welded together after sustaining damage.

The Tianjin-based buyer, who bought the used Model S sedan on Tesla’s official website in June, was guaranteed it “has no structural damage and is in good condition.” But after the car repeatedly broke down, structural damage was discovered.

Tesla plans to file an appeal before the ruling takes effect, the company told Caixin.

The carmaker did admit in documents submitted to the court that the vehicle had been dented in an accident in January 2019, and part of its exterior had been cut and welded. However the company said that the vehicle didn’t sustain structural damage and that the repair methods were commonly used in the global automobile industry.

According to a third-party evaluation requested by the court, the repairs could impair the vehicle’s performance and also should have subtracted some 82,000 yuan ($12,500) from its price. But Tesla rejected this evaluation and maintained the car had not been in a major accident, on fire or underwater.

The court said Tesla should in future disclose more specific information about second-hand vehicles’ condition, previous repairs and past accidents.

A case like this is not rare in automobile industry. A Bentley Motors dealership was in 2017 ordered to pay over 20 million yuan to buyer who discovered his vehicle had been repaired twice before he purchased it.

The decision was overturned the following year by a higher court, on the grounds that the repair records had been made available online prior to the purchase and the car’s function hadn’t been affected by the repairs.