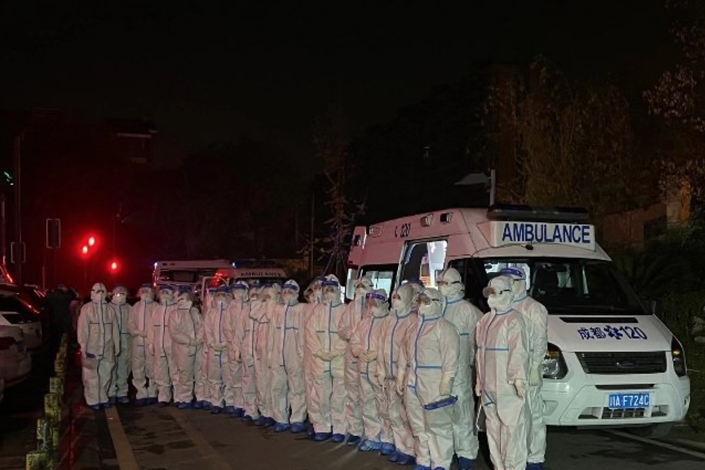 Doctors were gathering in response to the virus resurgence in Chengdu. Photo: Weibo

What’s new: The southwestern Sichuan province’s capital city of Chengdu has gone into “wartime” mode to contain the latest virus resurgence after reporting five confirmed Covid-19 cases in the last two days, local authorities said in a statement (link in Chinese) on Tuesday.

Speaking at an emergency meeting Tuesday morning, Peng Qinghua, party chief of the province urged the city to “resolutely cut the disease’s chain of transmission and contain the outbreak within the minimum scale.”

Why it matters: The city reported three cases on Tuesday, bringing the total number of confirmed patients in the latest outbreak to five. A number of those infected had visited public places in the last two weeks, raising fears of a further spread of the virus in the 16 million-strong metropolis.

In one case, a 20-year-old female patient had visited a public park, a nail salon and three night clubs in the city's downtown area. In another case, a 69-year-old woman had visited local food market and village clinics.

What's more: Local health authorities have intensified contact-tracing, carrying out disinfection and targeted testing. Club goers who visited the same night club as the young woman in the days since Dec. 6 have been required to undertake a nucleic acid test. The village where the first two patients were discovered has been sealed off for disinfection and sweeping tests of its nearly 4,000 residents.