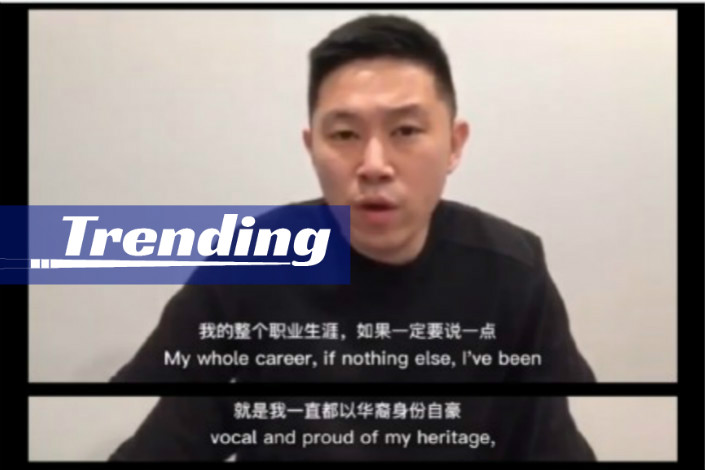 The hashtag #Monster Hunter Pulled #怪物猎人下架# referring to a movie named “Monster Hunter” that was pulled from cinemas due to a scripted pun uttered by the actor MC Jin, has been viewed 10 million times, although this is far fewer than the number of posts that condemned the movie over the weekend.

MC Jin subsequently posted a video apologizing for any offense caused by his pun which has accrued a million views and more considerate comments.

Adapted from a video game by the same name, the highly anticipated “Monster Hunter” made a brief appearance on the Chinese big screen over the weekend but was swiftly pulled following viewers’ disgust at a piece of dialogue between two soldiers.

In the scene, involving a white character and an Asian character, the soldier played by MC Jin says, “Look at my knees!” to which the other soldier asks, “What kind of knees are these?” “Chi-knees!” replies Jin. The pun was taken by many viewers as a racist insult to Asian people in general and how they stereotypically pronounce certain English words, and insulting to Chinese people in particular for being a subtle reference to kneeling, a symbol of subjugation.

The film opened in China on Friday, but was given a poor rating and masses of angry reviews, scoring less than five on Douban. By Saturday, screenings nationwide were paused and then halted, as the outcry persisted.

As outrage spread on Weibo, American-born MC Jin recorded a video on Instagram saying, “It is a pity things have developed in this way despite the original meaning of my line being positive. My whole life I’ve been vocal and proud of my heritage.”

After his success on the Chinese TV show “The Rap of China” in 2017, the rapper, whose name is Jin Au-Yeung, gained enormous popularity in the mainland Chinese market. Overseas, he is known for songs including “Learning Chinese” in which he raps about being part of the Chinese diaspora.

Despite production by an international team including Chinese internet giant Tencent, the short-lived fate of “Monster Hunter” shows the importance of understanding Chinese cultural sensitivities and tastes in what has become the world’s largest film market during the global pandemic.

With the online rancor of the past few days now muted, MC Jin’s apology on Wednesday for hurting the feelings of the Chinese people was met with mixed reactions. Weibo celebrities expressed disappointment, with one top comment reading, “Such a good opportunity gone to waste! Now this year is ruined [for MC Jin], so let’s talk again next year.”

Another expressed some sympathy with the rapper-turned-actor. “People who say he’s only in China to earn money or that ‘He doesn’t care about Chinese people, only Americans’ are just bitter that he earns so much.”

Another blogger said, “I can only say that he doesn’t yet understand much about Chinese culture. Chinese netizens are incredibly triggered by the word Chinese, so best not touch it.”

One person said it would be better if MC Jin had apologized in Mandarin or Cantonese.

Related: Wall Street Learns Hard Lesson on Why Not to Say ‘Pig’ in China