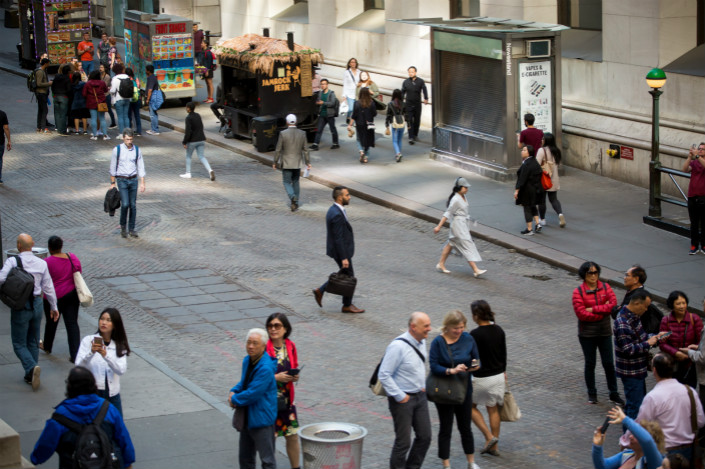 (Bloomberg) — Wall Street is getting a costly language lesson.

For financial professionals around the globe this week, rising trade tensions and fears of a slowdown were no match for an unlikely drama suddenly unfolding in China: UBS Group AG’s struggle to quell a public uproar over an economist’s quip about pork prices.

Inside banks and investment firms, debate swirled across desks and trading floors. Many were baffled by the outrage.

Was the furor in China — amplified by state media and a local industry group’s demand for the economist’s firing — some sort new front in the trade war? Might U.S. and European banks on the cusp of expanding in mainland China be thwarted over perceived slights? And what exactly was the insult?

At issue was an attempt by UBS’s global chief economist, Paul Donovan, to weigh in on whether a swine flu epidemic in China should worry investors focused on global inflation: “It matters if you are a Chinese pig,” he said of the disease. “It matters if you like eating pork in China. It does not really matter to the rest of the world.”

That particular phrasing, it turns out, was a perfect storm of grammar and word choice — ready-made for mistranslation.

Jasmine Fan, a strategist at BlackRock in New York, who grew up in China and speaks both Mandarin and English, echoed other bilingual denizens of her industry who grasped the issue and attempted to explain it.

“I don’t think there’s any problem in the English context, but it does sound pretty bad when you read the Chinese translation,” she said. For starters, the expression “if you are” is fairly common in English, yet relatively rare in Chinese, where it’s more likely to be understood as a personal reference to the listener.

Another problem was Donovan’s undiplomatic combination of “Chinese pig.”

“Usually, when traders refer to swines, they use the word ‘hog’ instead,” said Victor Shih, an associate professor at the University of California, San Diego. “‘Pig’ is often used in a derogatory way.”

“Almost everyone in the Chinese finance community has been offended by this tasteless comment,” Hao Hong, head of research and chief strategist at Bocom International Holdings Co., said in a post on his WeChat account Friday.

UBS asked Donovan to go on leave, took down a recording of his comments and issued a statement, saying “we apologize unreservedly for any misunderstanding caused by these innocently intended comments.”

Yet that privately frustrated many English speakers across Europe and in the U.S. struggling to understand the backlash. In interviews with analysts and fund managers in those regions, many said the reaction in China was clearly overblown. Several expressed sympathy for Donovan and said they were disappointed his Zurich-based employer didn’t defend him more strongly. They asked not to be identified because of the sensitivity of the situation.

UBS and a number of other global banks happen to be poised to expand their businesses in the mainland after years of waiting. Late last year, the Swiss firm increased its stake in a securities unit there to 51%. Firms including Nomura Holdings Inc., JPMorgan Chase & Co., Morgan Stanley and Credit Suisse Group AG have received approvals to expand or have been working toward majority stakes.

Bill Bishop, who writes the Sinocism newsletter on Chinese current affairs, said he doubts the incident was “manufactured” by authorities. Instead, it’s a reminder that global companies hoping to expand in China always need to speak carefully or risk punishment.

“It goes back to the power and allure of the Chinese market, and the leverage it gives to China and the Chinese people when they want to wield it,” said Bishop, who speaks Mandarin and lived in the country for a decade until 2015.

That dynamic is heightened now by U.S.-China trade negotiations, said Michael Hirson, a Eurasia Group analyst focusing on China and Northeast Asia. “The state media has taken a more defensive and aggrieved tone,” he said.

On Friday, the website of the People’s Daily, the official newspaper of the Communist Party, published a commentary titled: “Chief Economist of UBS, Who Gives You the Courage to Insult China?” According to the article, Donovan’s comments “are unacceptable. It’s not about tolerance. On the issues of national pride, national principles and national feelings, we absolutely won’t tolerate the sickening words and behavior that hurt China.”

The episode also went viral on social media. As the business week wound down, the hashtag “suspension of UBS’s chief economist” ranked within the top 10 on Weibo, a platform similar to Twitter, drawing in more than 1 million views.

“The Chinese internet can be very sensitive about such things,” said Peter Zarrow, a history professor at the University of Connecticut, who predicts the controversy will soon blow over. “‘If you are an American pig,’” he noted, “doesn’t sound very nice either.”