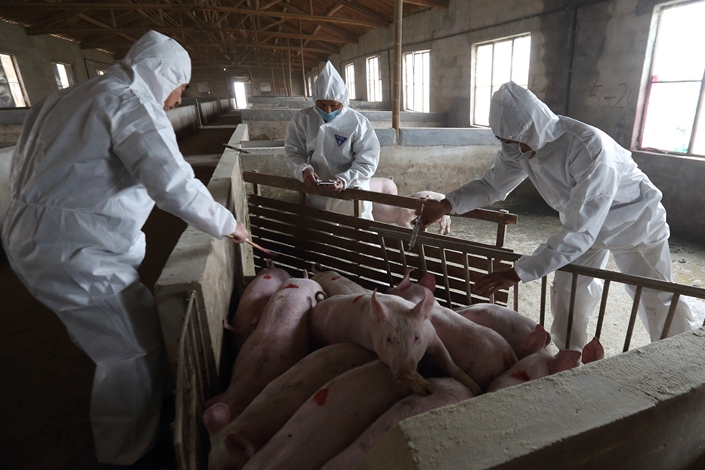 Hopes of a vaccination for the deadly African swine fever (ASF) that has ravaged China’s pig stocks were dashed on Thursday night when China’s agricultural ministry reported it had found “no scientific basis” in a proposed solution.

It was responding to an announcement by pharmaceutical company Guangdong Highsun Group Co. Ltd. that it would spend 900 million yuan on research into a natural compound vaccine the company said could effectively “prevent and cure” the disease.

The spread of the swine fever strain has resulted in the culling of nearly 1.2 million pigs since the first reports of it being found in China emerged in August. ASF is deadly to most pigs and currently does not have a vaccine or cure.

The claimed vaccine backed by Highsun is a natural compound, a polysaccharide injection, and was allegedly approved by Hainan agricultural authorities. Hainan’s Propaganda Department published a report on Wednesday that the vaccine had been successfully developed.

It cited support from Hainan Provincial Department of Agriculture and Rural Affairs to isolate the compound ingredients from tropical plants. Preliminary clinical trials had shown a preventative effect, the bulletin said.

The news, however, was greeted with concern and skepticism. The same night, the Hainan agricultural department told state-owned online news portal The Paper that it had not issued an announcement on the successful development of an ASF vaccine.

The company announcement specified that research had shown “preventative effects,” not “successful development,” an official from the department told The Paper.

While Highsun’s announcement claimed the vaccine’s developer, with which the company has signed a research agreement, had already patented rights to the “jinzhu polysaccharide injection,” Caixin did not find any patents under this name in the database on the National Intellectual Property Administration’s official website. The last patent application under the name of the lead researcher, Xu Qitai, was in July.

China’s Ministry of Agriculture and Rural Affairs also said in its statement that it had not approved any preventative medicines or vaccinations for ASF. The polysaccharide injection had not been applied for veterinary drug registration, nor had the enterprises concerned obtained a license to produce it. The ministry said the research team had so far failed to even file applications for clinical trials of the drug in accordance with regulations.

China has strict regulations on research and experiments that deal with highly pathogenic microorganisms, such as those found in the ASF virus. It requires central authority approval for such activities. According to the agriculture ministry, “the above application was never received from the relevant units.”

After Highsun, which is listed on the Shenzhen Stock Exchange, announced its plans to back Xu’s research, its share price surged for three days. But on June 13, the exchange sent a letter of concern to the company, requesting that it disclose the patent information and provide evidence of the efficiency of the vaccine.

The letter also asked Highsun to provide the due diligence survey of Xu’s research team’s company, which was only established on May 24.

Caixin’s attempts to contact Xu and the research company were unsuccessful. Highsun confirmed it was preparing relevant material for the Shenzhen Stock Exchange and said it would release the information publicly, but said no other information was available.

The first case of ASF in China was reported in August. By April, it had spread to all 31 of China’s provincial-level regions. More than 1 million pigs have been culled in the epidemic, seriously damaging the reputation of the world’s largest consumer of pork and driving up prices for the meat.

A previous version of this story misquoted Highsun Group’s announcement. The company said the vaccine could effectively “prevent and cure” the disease.