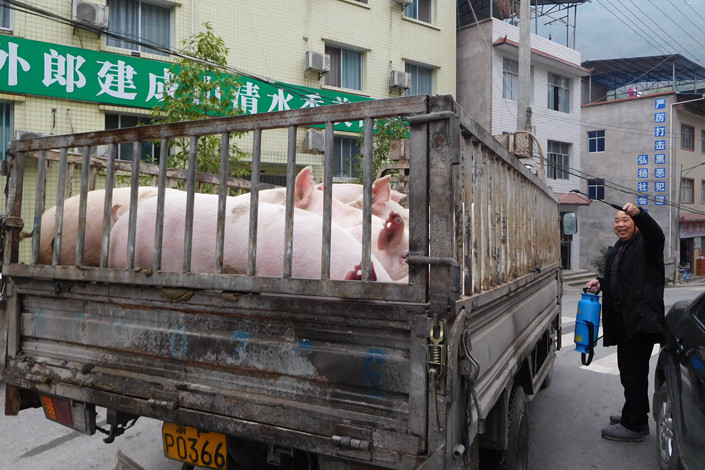 Vehicles transporting live pigs are inspected for African swine fever at a checkpoint in Chongqing on Feb. 17, 2019. Photo: IC Photo

(Bloomberg) — Beijing is preparing to allow more sources of imported meat in an effort to overcome potential pork shortages as African swine fever shrinks domestic hog herds, according to the China Meat Association.

China may lift restrictions on buffalo meat imports from India as well as live cows and sheep from Mongolia and pork from Russia, Gao Guan, the vice president of the association, said Monday in Beijing. China is also looking to expedite the resumption of U.K. beef imports to this year from next after agreeing to lift a ban in 2018, he said.

“Though China is boosting its own production, more countries will also be allowed to export to the country after the outbreak of African swine fever,” Gao said. “The expansion of meat imports will cover any potential animal protein shortages in the country.”

Exports from the targeted countries are currently restricted for a number of reasons, including BSE and swine fever. There is no timetable for the changes, which are pending final approval from China’s customs, Gao said. The General Administration of Customs couldn’t be reached for comment.

Beijing is seeking to expand potential sources of imported protein as the nation culls more than 1 million hogs to contain the spread of African swine fever while shunning supplies from the U.S. because of the ongoing trade dispute. China recently allowed poultry imports from Russia for the first time since the Soviet era.

Germany’s agriculture minister plans to visit China later this week in a bid to ease trade restrictions on products like beef and poultry, according to a press release on Monday.

Increasing the potential sources of tested and certified meat would also help reduce smuggling, Gao said. Beijing has recently stiffened controls at its borders to clamp down on illicit trade of produce from its immediate neighbors.

China’s pork production may decline about 30% in 2019 because of African swine fever, Rabobank predicted in April. A drop of that size would be roughly the same as Europe’s entire annual pork supply, the bank said.