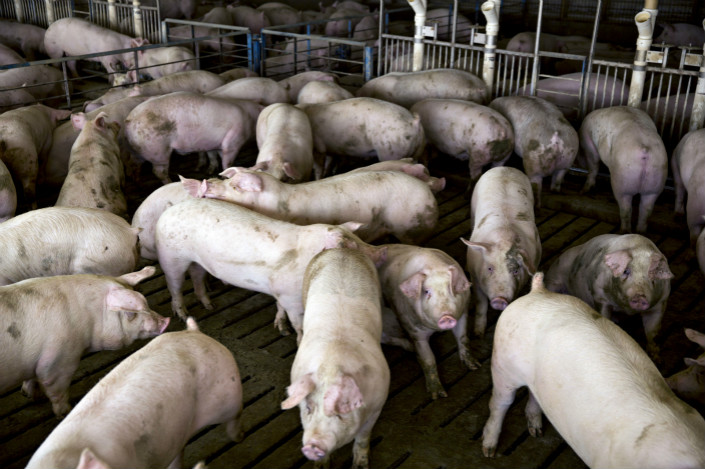 From July 1, abattoirs must routinely test all batches of hogs representative of the property from which they came. The order Tuesday adds to a suite of measures the Ministry of Agriculture and Rural Affairs has instituted to arrest an increase this year in the number of villages reporting cases of the viral disease.

Slaughterhouses must buy diagnostic equipment or arrange a third party to perform the tests, the ministry in Beijing said last month. By May 15, every slaughterhouse will be required to have a veterinarian present to supervise testing.

The tighter measures are aimed at safeguarding the food chain and environment from the virus, which isn’t known to harm people. The consumption by hogs of contaminated food waste has been implicated in the spread of the disease, which has reached 31 provinces and territories since August.

These are “important measures to cut off the transmission of African swine fever and lower the risk of further spread,” Vice Minister Yu Kangzhen was quoted as telling a conference on Tuesday.

Blood is the most infectious source of African swine fever and one drop, or 0.05 milliliters, from an acutely infected pig may contain 50 million virus particles. Experimental studies have found that just one virus particle ingested in contaminated drinking water or fodder may be sufficient to infect a single pig.

Contamination of slaughterhouses and their surrounding environment by the virus can create reservoirs of the infectious agent that can be transmitted to exposed pigs and wild boars, the ministry said in a statement on April 30.

“Timely detection of the virus to eliminate hidden dangers is a must to prevent and control animal diseases and ensure product quality and safety,” it said.

Pig blood was found to be discarded directly into sewers, potentially contaminating the environment after the government temporarily disallowed the use of the product in animal feed last year, Huang said. The government permitted in January the use of blood in feed as long as the liquid is heat-treated to render any virus non-infectious.

Studies of 68 outbreaks showed that almost half were caused by the spread of virus material on vehicles and on non-disinfected workers; a third were caused by feeding pigs contaminated swill or food scraps; and 19% were due to the transportation of infected pigs and meat products across regions.

Abattoirs which aren’t compliant with the testing requirement by July 1 may be closed down. The agriculture ministry will release a list of all legally compliant pig-slaughter enterprises by July 31, it said last month.

Still, many small and mid-sized abattoirs may not be able to afford the testing regimen. Meat packer groups are seeking government subsidies to support testing capabilities, which cost one large company operating 18 slaughterhouses 25 million yuan ($3.7 million) to implement, an industry official said.

Sampling abattoirs is simpler than conducting surveillance on swine farms, of which China has some 26 million, most of which raise fewer than 500 hogs.

Chinese authorities asked food producers in late 2018 to trace the origins of their pork supplies after some products tested positive for African swine fever. Pork dumplings from a Chinese frozen-food producer Sanquan Food Co. were found with the virus in February, triggering a slump in the company’s shares.