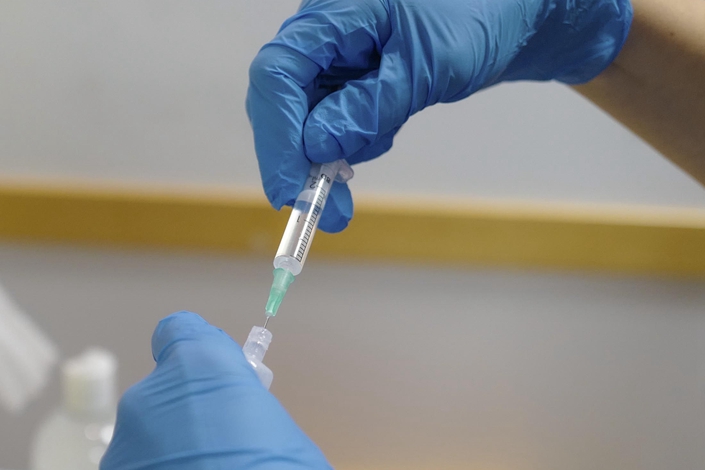 A staff nurse at the Royal Cornwall Hospital prepares to administer Covid-19 vaccinations as the hospital began their vaccination programme on Dec. 9 in Truro, United Kingdom. Photo: Bloomberg

(Bloomberg) — Uganda approved a request by Chinese residents to import 4,000 doses of a Covid-19 vaccine from their home country for their own use.

The inoculation will be provided to Chinese living in an industrial zone, about 58 kilometers (36 miles) northwest of the capital, Kampala, the Health Ministry said on its Twitter account.

The government “is not importing the Chinese Covid-19 vaccine for use by Ugandans,” the ministry said. The shot has yet to be approved by the World Health Organization, it said.

A vaccine developed by Sinopharm Group unit China National Biotec Group Co. has been administered to hundreds of thousands of people under emergency authorization in China, but it’s yet to receive public use approval from any drug regulators.

The plans to import the Chinese vaccine come amid a surge in coronavirus cases in Uganda. On Monday, the Health Ministry reported 701 new Covid-19 infections -- the most in a single day since the outbreak began. That took the total number of confirmed cases to 23,200 with 207 deaths, according to the ministry.

Gatherings including campaign rallies before the nation’s general elections next month and travel during the year-end holiday season may accelerate the spread of the virus.

Uganda’s government has applied for access to a vaccine for its citizens through Geneva-based Gavi, the Vaccine Alliance, according to the Health Ministry Permanent Secretary Diana Atwine. Inoculations to be administered to Ugandans will first have to obtain regulatory approval, Atwine said.