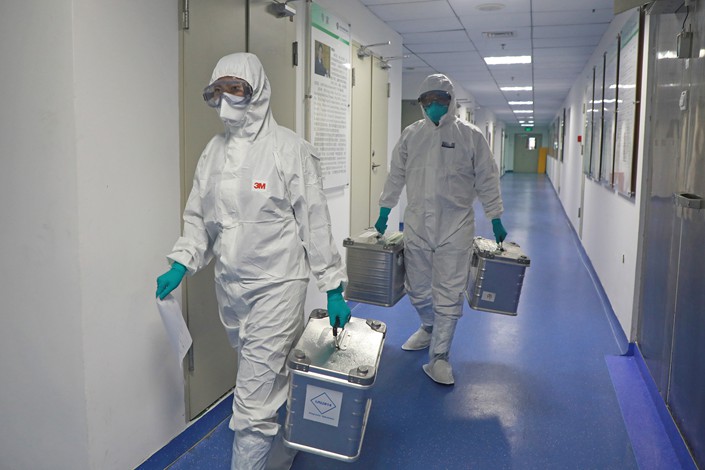 Medical workers on March 2 carry samples to a lab at the Shenzhen Center for Disease Control and Prevention in Shenzhen, South China's Guangdong province.

China is considering setting up a powerful new disease control agency as part of public health reforms in the aftermath of its deadly Covid-19 epidemic, Caixin can reveal.

The new disease control agency may combine the departments of the National Health Commission (NHC) responsible for public health and emergency responses with the China Center for Disease Control and Prevention (China CDC), the country’s main protector of public health and safety, Caixin understands.

The development follows last month’s promotion (link in Chinese) of 52-year-old Lei Haichao to deputy director of the NHC from heading its municipal counterpart in Beijing. Sources said, without elaborating, that his appointment was related to upcoming reforms of China’s disease control system.

Public health reform is high on the Chinese government’s agenda after Covid-19 exposed shortcomings in the Asian giant’s disease control and prevention mechanisms, including weak administrative powers, lacking interagency communication, poorly defined roles and responsibilities, and a shortage of funding in key areas.

In May, Chinese President Xi Jinping ordered delegates at the country’s annual political meetings in Beijing to seek overall reforms to the health care system while streamlining medical care, improving the structures and mechanisms of disease control and prevention, and strengthening administrative roles and oversight.

Officials and scholars have been debating changes to the public health system since at least the summer. Although many agree on the need for significant reforms, they disagree on what form they should take.

Lei’s appointment could presage a systemic overhaul. The NHC now has five deputy directors — one more than a staffing plan published by the government in 2018 — fueling speculation that one may have been groomed for a leadership position in an unannounced new agency or a newly empowered existing one.

Several public health sources told Caixin that the government could announce structural reforms to the China CDC as early as the end of December, though the final plan is still under discussion.

China, where the novel coronavirus that causes Covid-19 was first detected, has brought its outbreak under control. The Chinese mainland confirmed 16 new cases Sunday, two of which were locally transmitted, according to the NHC.

The new infections brought the total number of confirmed Covid-19 cases on the mainland to 86,741. The death toll remained unchanged at 4,634.

This story has been updated to correct the number of confirmed cases of Covid-19 on the Chinese mainland. It is 86,741.