Investors Are Learning to Live With China’s Credit Defaults 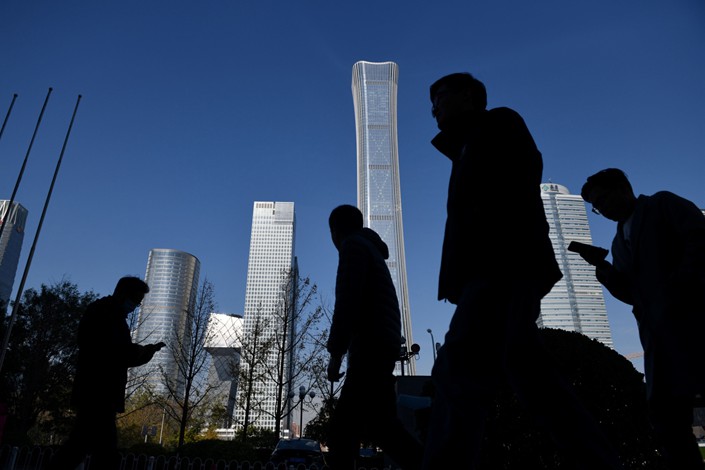 People walk past skyscrapers in the central business district in Beijing. Photo: Bloomberg

(Bloomberg) — China’s authorities are increasingly spreading the message: you should get what you pay for when it comes to corporate bonds.

Beijing is allowing a wave of defaults by state-linked companies in the country’s $15 trillion credit market. Last week, prominent chipmaker Tsinghua Unigroup Co. defaulted on $450 million of dollar debt triggering cross-defaults on another $2 billion — equivalent to almost two-thirds of the total defaulted debt in China’s offshore bond market in 2019.

While this may be bad news for the weakest state-owned enterprises, it’s an improvement for investors, the credit market and China overall. A more accurate pricing of risk gives buyers of bonds greater transparency in a relatively opaque economy. That would boost the allure of Chinese debt, drawing more inflows, which in turn would help reduce the reliance of the nation’s capital markets on the government. State banks are among the biggest buyers of onshore corporate debt.

“For the first time we might have the opportunity in the medium term to have a genuine local high-yield market, that’s what has been missing for years in China,” according to Jean-Charles Sambor, head of emerging markets fixed income at BNP Paribas Asset Management in London. “2021 could be an inflection point” for the introduction of a “genuine credit risk mechanism in China.”

Though the November defaults sparked a brief selloff and canceled sales onshore, Unigroup’s default did little to shake the broader offshore junk market, where yields actually dropped. The risk was contained to holders of debt issued by Unigroup, a company that’s been missing payments for the better part of a month.

Improving the efficiency of the debt market is becoming a priority for policymakers. They have a tough climb ahead of them. In China, about 96% of onshore credit ratings are the equivalent of investment grade.

China’s central bank has vowed to improve its oversight of the ratings industry. People’s Bank of China Deputy Governor Pan Gongsheng said sector problems include inflated credit ratings, and these firms need to improve their quality of work, according to a statement on the PBOC’s website dated Sunday. In fact, two former general managers at Golden Credit Rating International Co. are being prosecuted for allegedly inflating the ratings of some companies that offered bribes, according to a Monday statement from the Central Commission for Discipline Inspection.

The recent defaults are prompting investors to put a premium on state-owned firms, especially the weakest ones. The average yield on riskier SOE bonds rose to a record 7.36% on Dec. 10. Even top-rated SOEs are starting to feel some pain; the average yield on their bonds is about 5%. That’s up 32 basis points from a year earlier, Bloomberg-compiled data show.

Investors’ equanimity doesn’t mean Beijing’s plan will proceed smoothly. Pockets of pain may emerge around a certain industry or province that may drag down good credit with the bad. Since last month’s unexpected default by Henan-based Yongcheng Coal & Electricity Holding Group Co., only one non-financial firm from the province has managed to sell debt.

But authorities will be on guard to limit any broader impact from defaults, according to Thu Ha Chow, a portfolio manager at Loomis Sayles Investments Asia Pte.

“We do not expect regulators will allow for a disorderly sell-off to cause a systemic risk,” said Chow, who is looking for buying opportunities among onshore SOEs in the year ahead. “What is important for China’s bond market development is for defaults to be resolved in a fast and predictable manner so that companies and investors can appropriately price risk rather than artificially avoid defaults which lead to moral hazard.”