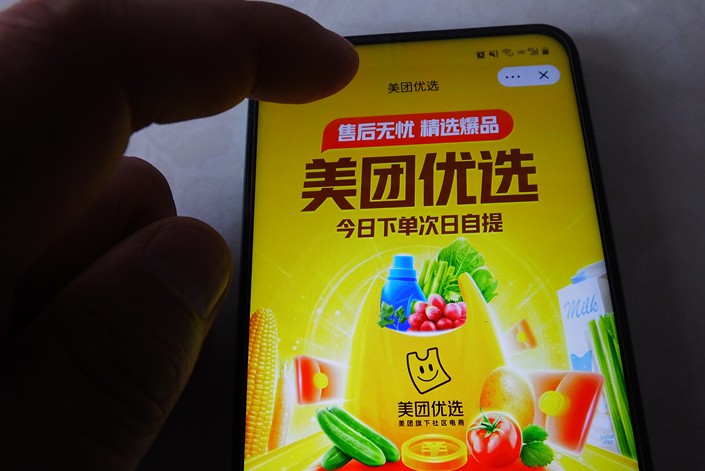 Meituan Select is the newest of the company’s three initiatives in the grocery retailing business, a hotly contested space where the company goes head-to-head with the likes of Alibaba and JD.com.

Online-to-offline services giant Meituan has handed over to police the case of a mid-level manager suspected of accepting bribes, sending a message to other employees as it gets set to rapidly expand its recently launched community-based grocery service.

The company announced the action in an internal memo to workers of its Meituan Select division, detailing the case involving Ma Jun, regional manager for the service in northwest China’s Shaanxi province and Ningxia Hui autonomous region, a source close to the company confirmed to Caixin. No details were given on the amount of bribes that Ma accepted.

Meituan’s action is the offshoot of a government-led anti-corruption campaign launched by President Xi Jinping nearly a decade ago. That movement initially focused on officials suspected of corruption in government agencies and state-owned enterprises. But in recent years it has also been adopted by big private sector names like Alibaba, Huawei and Meituan, which also face similar problems of employees abusing their positions for personal gain.

The latest case may be meant as a warning signal for workers at Meituan Select, which launched over the summer and uses a complex business model due to the nature of delivering groceries ordered online to millions of homes in a timely manner. In its memo announcing Ma’s case, including his detention by police in the Shaanxi capital of Xi’an, Meituan noted that workers in the new unit should be extra vigilant due to its newness and business model.

The note said Ma was discovered to have accepted bribes from various partners involved in Meituan Select’s distribution system, which sees products pass through a chain of at least three increasingly smaller warehouses as they move from actual merchants to home deliverymen. The use of local franchising partners at many of the smaller warehousing sites makes the system especially vulnerable to corruption.

Meituan Select is the newest of the company’s three initiatives in the grocery retailing business, a hotly contested space where the company goes head-to-head with the likes of Alibaba and JD.com, according to a note issued earlier this month by China Galaxy International. After several months of piloting the model, Meituan is getting set to aggressively expand its coverage, Galaxy said.

“The Meituan Select business is still in the experimental stage regarding group leader management, supply chain efficiency, SKU variety and the pace of expansion,” China Galaxy said. “We expect Meituan to aggressively invest in its Meituan Select business in the next couple of quarters, given the large market size for online fresh food purchases and potentially better unit economy of this model.”