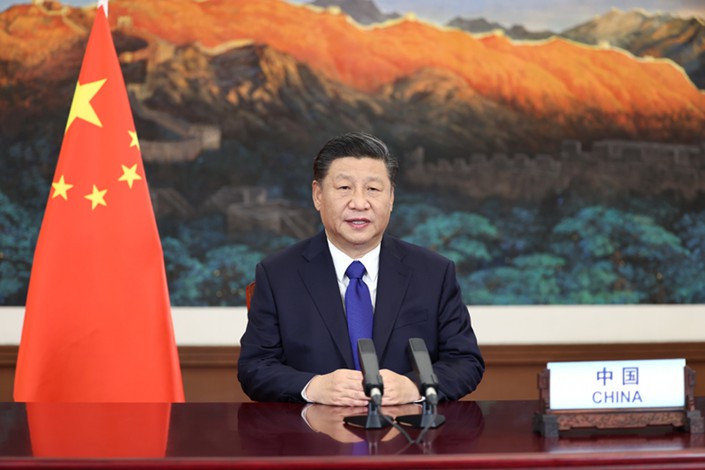 China, the world’s biggest emitter, would cut emissions per unit of GDP by 65% from 2005 levels and increase the share of non-fossil fuels in primary energy consumption to around 25% by 2030, Xi said at the virtual conference, which marks the fifth anniversary of the Paris Agreement’s adoption.

China would also increase forest stock volume by 6 million cubic meters from the 2005 level and bring total installed wind and solar power capacity to over 1.2 billion kilowatts by that time, he said. China’s total installed renewable power capacity, including hydrogen, wind, solar and biomass, was 730 million kilowatts at the end of 2018, its National Energy Administration said last year.

These new targets fall under Beijing’s broader commitment to achieving peak carbon emissions by 2030 along with a pledge to carbon neutrality by 2060, which Xi first announced in September.

He made no mention of China’s coal activities, which remain a large concern as Beijing embraces an increasing role in climate leadership.

“Unilateralism will get us nowhere,” Xi said, in an apparent swipe at Washington under President Donald Trump’s leadership. “Only by upholding multilateralism, unity and cooperation can we deliver shared benefits and win-win results for all nations.”

The U.S., the world’s second-largest carbon emitter, formally withdrew from the Paris Agreement this year after Trump first announced the decision in 2017. However, U.S. President-elect Joe Biden issued a statement Saturday pledging to rejoin the Paris Agreement on day one of his presidency.

“I’ll immediately start working with my counterparts around the world to do all that we possibly can, including by convening the leaders of major economies for a climate summit within my first 100 days in office,” he said. “The Biden-Harris Administration will increase the ambition of our domestic climate target and put the country on a sustainable path to achieve net-zero emissions no later than 2050.”

“More needs to be done to align near term action and China’s carbon-free vision,” Li wrote in a tweet.

Xi’s announcement of China’s climate goals before the outcome of the U.S. presidential election became clear showed that “climate leadership has crossed the geopolitical Rubicon in Beijing’s eyes,” according to Kevin Rudd, a former Australian prime minister.

“In other words, it has become a central priority for China irrespective of the steps taken by other countries, including the United States,” Rudd, now president of the Asia Society Policy Institute, wrote this week.

Also at the Saturday summit, Indian Prime Minister Narendra Modi announced the country’s new target of achieving 450 gigawatts of renewable energy capacity also by 2030 — further from a previously set target of 175 gigawatts by 2022.

Pakistani Prime Minister Imran Khan said the country will have no new coal power plants. “We have already scrapped two coal power projects that were supposed to produce 2,600 megawatts of energy, and replaced [them] with hydroelectricity.”

While the country’s contribution to global emissions is less than 1%, “sadly we are the fifth-most vulnerable country to climate change,” Khan said.

Sixty percent of Pakistan’s energy will be through renewables by 2030, while 30% of all vehicles will be electric by that time, he said, adding the country will also plant 10 billion trees in the next three years as a nature-based solution to mitigate effects of climate change.

Japanese Prime Minister Yoshihide Suga reaffirmed the country’s pledge to achieve carbon neutrality by 2050 and said it would aim to submit new targets for 2030 to the U.N. by next year’s Climate Change Conference in November.

Japan will work toward a green society through innovations such as next-generation solar cells, carbon recycling and the utilization of hydrogen, he said.

In 2020, Japan provided public and private climate finance of 1.3 trillion yen ($11 billion) to developing countries — a scheme first announced in 2015 — as well as up to $3 billion in contributions to the Green Climate Fund.

He noted that Singapore has submitted its enhanced nationally determined contributions, or a country’s climate action plan — expected every five years under the Paris Agreement, with the latest round due Dec. 31.

Over 122 countries in the climate pact, including China, have communicated their intention to upgrade their goals but have yet to submit new targets, according to a tracker by managed by the Washington-based World Resources Institute. Japan communicated a contribution unchanged from 2015 in March, to the disappointment of many climate watchers.