Solar Powers Its Way to China’s No. 3 Electricity Source 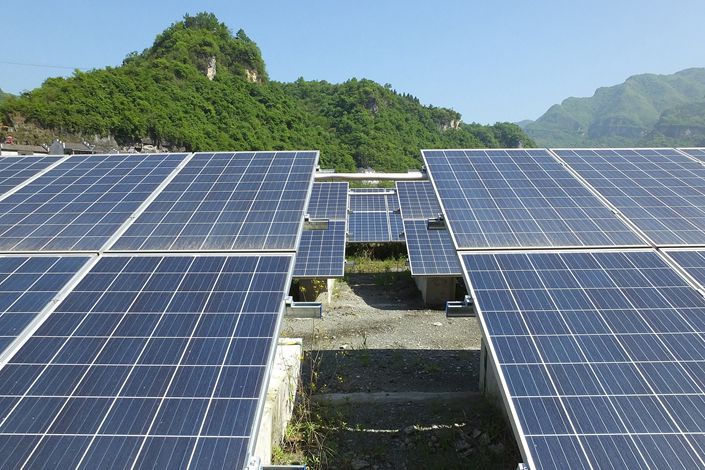 A solar power station under contruction in Yichang, Hubei province, on April 19.

Solar power is set to edge ahead of wind to become China’s third-largest electricity source by year-end, the National Energy Administration (NEA) said, as the sector rapidly becomes a commercially viable option to traditional carbon-based fuels.

Of China’s total power generating capacity, coal-fired power still accounts for the largest single part by supplying half the nation’s 2,100 gigawatts of capacity at the end of October. Hydropower was second with about 18%, while wind and solar each supplied about 11%.

But solar has been growing quickly thanks to rapidly maturing technology that has lowered prices and boosted efficiency, making it a commercially viable alternative to coal and other carbon-based energy sources.

At the current rate of new additions, China should reach about 240 gigawatts of solar capacity by the end of the year, representing 16.2% growth from the end of 2019, said Ren Yuzhi of the NEA’s new energy and renewables division. That total would represent a significant overshoot of the target for solar installation under the nation’s current 13th Five-Year Plan that runs through the end of this year by 2.3 times, reflecting the energy source’s increasing attractiveness.

Ren predicted the growth rate for solar installations will be even faster in the upcoming 14th Five-Year plan that runs from 2021 to 2025, as more and larger-scale solar farms get built. Some of that will come from continuing government incentives tied to programs aimed at improving living standards in rural areas. But much could come from projects that require little or no state support.

The China Photovoltaic Industry Association predicted that China could add as much as 70 gigawatts to 90 gigawatts of new capacity each year during the new five-year plan.

Association Secretary Wang Bohua pointed out that during the soon-to-end 13th Five Year plan, many solar panel manufacturers and other companies in their supply chains doubled in size, with polysilicon output up 136.4% and solar module output up 133.6% over that period.

At the same time, costs came down rapidly as technologies matured, with the cost of polysilicon — a key component in solar cells — down about 25% over that time. As that happened, many other component prices dropped 50% or more.

But the NEA’s Ren pointed out that the addition of so much solar power has also created challenges for grid operators. One of the biggest is caused by the fact that such generators can only produce during daylight hours, meaning a major power spike occurs when their output peaks around noon each day, only to plunge after sundown.