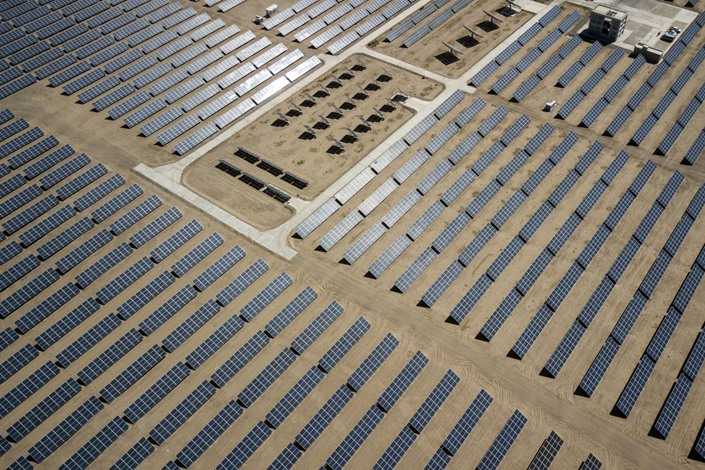 That surge continued Friday as mainland-listed solar giants like Longi Green Energy Technology Co. and Tongwei Co. jumped in their first trading after a week-long holiday during which some peers in Hong Kong posted gains of more than 20%.

The furious rally illustrates the growth potential investors see in Beijing’s effort to go from the world’s biggest polluter to carbon neutrality. The shift could require anywhere from $5 trillion to $15 trillion in investment, much of it in wind- and solar-power generation.

The premium that mainland stocks, known as A-shares, normally have over Hong Kong counterparts has narrowed during the trading holiday, said Dennis Ip, an analyst with Daiwa Capital Markets. “So it’s very likely that A-shares of solar companies are going to have very good performances” on Friday.

China is home to the most solar panels and wind turbines in the world, and is also the leading manufacturer of both. Its companies are technology leaders in photovoltaic panels, which are seen as the leading source of future power, according to BloombergNEF.

Government officials are already considering proposals to accelerate adoption of clean energy, which would boost installations of solar and wind, in its next five-year plan, which begins in 2021.

Longi, which makes wafers, cells and panels and is the world’s largest solar company by market capitalization, which rose as much as 9.3% in Shanghai

Tongwei, a major producer of polysilicon and solar cells, rose as much as 10%

Sungrow Power Supply Co., which makes inverters for solar panels, gained as much as 18% in Shenzhen

Hong Kong-listed renewable companies on Friday pared some of their gains made since Xi’s announcement in a Sept. 22 speech to the United Nations:

GCL-Poly Energy Holdings Ltd., one of the world’s biggest producers of polysilicon, the key material for solar panels, fell 4.4% Friday and is up 47% since Sept. 22

Daqo New Energy Corp., a polysilicon-maker based in China and traded in New York, fell 1.2% Thursday and is up 62% since Sept. 21