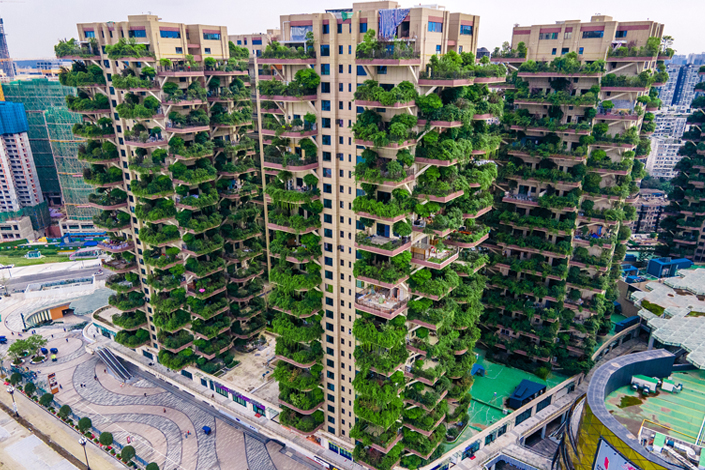 Buildings in a residential community on Sept. 15 in Chengdu, Southwest China’s Sichuan province.

One of China’s foremost energy experts has urged the country to place market forces at the center of its transition to clean power, as part of its efforts to slash carbon emissions to net zero by 2060.

To meet that target, the world’s largest coal consumer must wean its renewables sector off government support over the next five years, said Yuan Jiahai, a professor at North China Power University.

“Every system and every policy in our power sector … must revolve around the bigger picture of marketization,” he said Monday at the China Blue Sky Observers Forum, an annual environmental conference.

Despite its reliance on coal, China leads the world in renewable energy production. However, the robust growth of the country’s green power industry in the last two decades owes much to favorable government policies and subsidies — a strategy that some experts say must change if the country is to meet the carbon neutrality pledge announced by President Xi Jinping last week.

Yuan called on the government to incorporate “profound market reforms” to the renewable energy sector during the next five-year plan, combining a vast increase in renewables production with the withdrawal of subsidies. The plan will run until 2025.

The world’s No. 2 economy must also put carbon neutrality at the heart of coal market reform and curb the expansion of the coal-fired power sector, Yuan said, adding that “every kilowatt (of coal capacity) we add now will be an extra burden after 2030.”

Under the terms of the Paris climate accord, which aims to keep global heating well below 2 degrees Celsius above pre-industrial levels, China has committed to reaching peak coal use by 2030 and targeting a rapid phaseout of the black rock thereafter.

Xi’s pledge to the United Nations General Assembly last week that Chinese carbon emissions would fall to net zero before 2060 has galvanized the fight against climate change, but has also drawn criticism from some quarters due to its lack of detail.

For now, many experts are treating the pledge as a symbolic gesture ahead of future policy announcements. He Kebin, an expert at the Chinese Academy of Engineering, said at Monday’s forum that the Xi’s statement sent an “extremely important signal” that Beijing was ready to speed up its shift toward a “green, high-quality development model.”

On Thursday, the International Energy Agency, a Paris-based intergovernmental group, said in a report that achieving global carbon neutrality by 2070 will be “virtually impossible” without removing heat-trapping carbon dioxide from the atmosphere, but that a suite of technologies that do exactly that — processes known as carbon capture, utilization and storage (CCUS) — are gaining momentum worldwide.

The report says retrofitting China’s coal, cement, iron and steel plants to capture and store carbon could prevent emissions from being “locked in for decades,” adding that the country could build the capacity to store the equivalent of 40 years of current carbon emissions, especially in its western and northern regions.

More than 30 CCUS projects have been announced worldwide since 2017, in countries and regions including the U.S., the EU, Australia, China, South Korea, the Middle East and New Zealand. But in China, their scope remains limited.

Although China has also experimented with CCUS, no projects have yet been demonstrated at an industrial scale, which is seen as a bridge to full commercialization, said Yang Xiaoliang, a carbon capture expert at the World Resources Institute, a global research nonprofit.

That might change during the next five-year plan if the government creates stronger incentives for businesses to develop and deploy CCUS and related technologies, Yang said, adding that scientific advances and more mature business models could hasten their rollout.

“It is simply impossible for China to achieve its carbon neutrality target in 40 years without CCUS, considering the existing energy and industrial systems that it has built since its economic reforms,” Yang said.