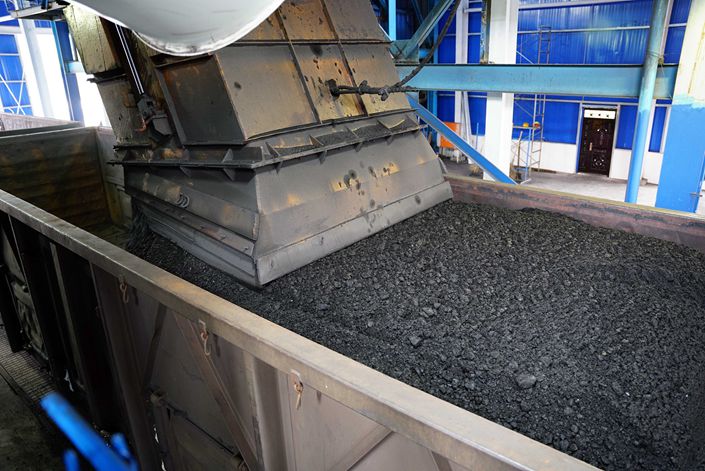 Coal is transported by railway in Xianyang, Shaanxi province, on Sept. 23.

China should slash consumption of raw coal by businesses and households by at least 150 million tons between 2020 and 2025 to improve air quality and protect the environment, according to a new report.

An annual study published Thursday by a research organization affiliated with the Natural Resources Defense Council, an environmental group, urges the government to sustain dramatic reductions in the use of so-called “dispersed coal,” fist-sized lumps of the black rock burned by households and businesses for heating and energy.

The report comes as Chinese policymakers put the finishing touches to the next five-year plan which will run until 2025. Environmentalists have called on the world’s largest coal consumer to take stronger action on carbon emissions and climate change, both of which would necessitate a speedier departure away from coal.

China’s environmental targets have been in the spotlight this week after President Xi Jinping said the country aims to achieve net zero carbon emissions before 2060, a surprise move that may herald a faster pivot away from coal use. While experts have largely welcomed the pledge, some have said it lacks detail and may not be compatible with the country’s ongoing coal expansion.

Although dispersed coal accounts for a fraction of China’s overall emissions, it is a leading driver of air pollution. Many households and businesses across the country’s north burn it in basic stoves for food and heating, often leading to upticks in pollution during winter months.

In recent years, the government has reduced reliance on dispersed coal by encouraging tens of millions of users to switch to gas-fired or electric alternatives, eliminating old and inefficient furnaces, and relocating polluting enterprises.

But the transition has not always run smoothly, with some areas experiencing fuel shortages, safety issues and heavy-handed implementation.

According to the report, China cut dispersed coal use by 49 million tons last year. Half of the reduction came from individual households, representing a rise of 22% on 2018. The country is on track to cut consumption by an estimated 200 million tons overall by the end of the current five-year plan this year.

The dispersed coal phaseout has driven rapid air quality improvements in areas historically blighted by smog events, the report says. In a number of key northern pilot cities including Tianjin, Taiyuan and Shijiazhuang, average autumn and winter daily concentrations of PM 2.5 — ultrafine particles that can pass through the lungs into the bloodstream and damage bodily organs — fell from 109.5 micrograms per cubic meter in 2016 to just 69.7 micrograms per cubic meter last year.

The target can be achieved by expanding pilot areas, improving subsidies for switching to renewable energy sources, tightening regulation of industrial dispersed coal use, and setting a “rational” timeline for a total phaseout, the report says, arguing for systemic safeguards against slack implementation.

Yang Fuqiang, a senior adviser at the NRDC, said China should draw up mid- to long-term plans to replace heating generated from dispersed coal with renewable sources like solar, geothermal and biomass, particularly in rural areas, as the price of clean energy becomes more competitive with traditional power sources over the next five-year plan.

At the same time, the new plan should “promote energy-saving buildings as well as power and natural gas infrastructure, and further reduce the cost of clean heating” to reduce reliance on coal, meet air quality targets and realize the government’s “Beautiful China” goals by 2035, Yang said.