In Depth: How ‘Clean Coal’ Might Be Poisoning Villagers in North China 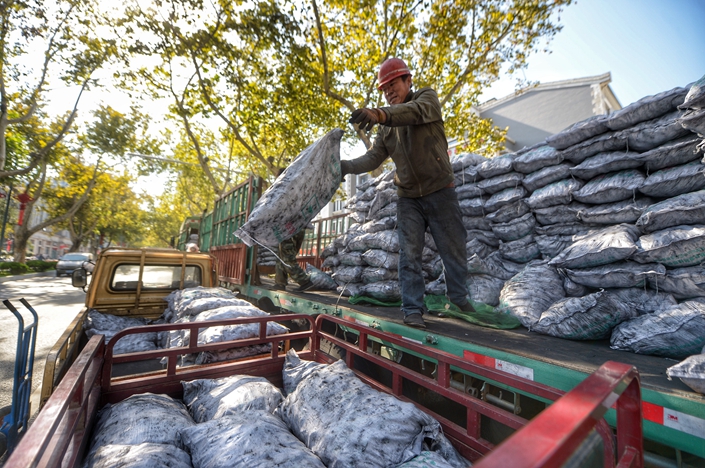 Unlike raw coal, clean coal is processed, which provides opportunities for unscrupulous companies to add poor-quality industrial products into the mix, the head of a coal products firm said.

While out driving on a frigid November morning in western China, trucker Guo Lisuo received a call from his 9-year-old daughter back in North China’s Hebei province. “I can’t find Mommy,” she said.

Guo told her not to worry. His wife, Wang Lixia, commonly checked on the family’s pigs at that time. He told his daughter to go look for her in the yard and call him back.

When the second call came, Guo’s daughter sounded even more panicked. “Mommy’s lying on the ‘kang,’” she said, referring to the heated bed-stoves made of bricks or clay used across the region. “She’s not moving.”

Guo immediately called a relative and implored him to take Wang to hospital. But by the time they arrived, it was too late for doctors to revive her. Wang had died of carbon monoxide poisoning at the age of 44.

Wang’s death is by no means an isolated case. Between Oct. 25 and Nov. 24, at least 24 people in Tangshan’s Yutian county, where the family lives, have been struck down with gas poisoning, five of whom died, according to Caixin research. And at a hospital in nearby Qing county, which is under the city of Cangzhou, staff treated 30 patients for carbon monoxide poisoning on Nov. 23 alone, according to the hospital’s official WeChat account.

While experts disagree on the exact cause of the deaths, Guo and others in Yutian suspect the true culprit is the “clean coal” that authorities have encouraged households and businesses to burn for heating this year.

In the last three years, authorities in the region made up of Beijing, Tianjin, and Hebei have encouraged residents to stop burning smog-producing raw coal in rickety home furnaces and switch to gas-fired or electric heating, helping spur dramatic improvements in air quality.

But the transition to smog-free heating in Hebei has been fraught since its inception. In 2017, the government abruptly reversed a blanket coal ban across 28 northern cities as natural gas shortages left many rural residents without heating in subzero temperatures.

Rural counties like Yutian, where more than 80% of the 692,000 residents live outside built-up areas, have lagged behind the rest of the province. Authorities there have only strictly enforced the clean-air policy since April, when the county committed to converting more than 130,000 households from coal to gas-powered or electric heating — 7.5 times more than it promised to convert last year — in a bid to eliminate coal dependence.

Officials also required businesses to obtain permits to sell coal for heating purposes, told vendors to sell only high-quality, smokeless varieties, and formed a taskforce to root out illicit sales.

But with winter looming and the work unfinished, officials let villages like Guo’s burn clean coal as a stopgap measure. The fist-sized nuggets of grayish-brown rock have been treated so that they give off little to no smoke, reducing the amount of smog-causing compounds in the air. However, they still emit invisible, odorless gases like carbon monoxide that can harm human health and even prove fatal.

“They came by with big loudspeakers demanding that we all burn clean coal. People came to check on us, too, confiscating all the other types of coal,” Guo recalled.

Older homes like Guo’s are susceptible to gas leaks. A coal-burning stove in the central living room feeds heat pipes connected to kangs in the two other rooms. Excess fumes should escape through chimneys in the roof, but Guo admits that the stove’s age and small, unsealed cracks in the old kangs may have allowed carbon monoxide to seep out and accumulate.

But Guo is convinced that the fuel, not his house, should be blamed for Wang’s death. He says the briquettes he bought burned poorly and created an unusual amount of ash. “How many years have we been using this stove? It’s part of our everyday lives,” he told Caixin. “We never had any problems with the old kind of coal. Why is it suddenly a problem now?”

Experts told Caixin that while faulty furnaces and poor ventilation are likely causes of poisonings, adulterated fuels can’t be ruled out. Unlike raw coal, clean coal is processed, which provides opportunities for unscrupulous companies to add poor-quality industrial products like clay, coal ash, and coal slurry into the mix, the head of a coal products firm said.

The spate of fatalities has heightened scrutiny of the complex supply chains running through household coal use in China and the patchy regulations governing the sector.

The bag of clean coal Guo’s family used on the night of Wang’s death bears the name of a production company named Wuwei City Xingxing Coal & Chemicals Co. Ltd. When Caixin called the company’s offices in Northwest China’s Gansu province, a staff member said they were unable to provide any information on the poisonings. However, a company staffer confirmed to regional news outlet on Dec. 4 that Yutian’s government had tendered Xingxing to supply clean coal to the county and that the briquettes complied with rigorous national quality standards.

Other supplies have murkier origins. Relatives of a Yutian husband-and-wife couple who died of coal-gas poisoning showed Caixin a bag of clean coal also distributed by Xingxing, but bearing a brand name associated with Lanzhou Lanmei Clean Energy Co. Ltd., another Gansu-based firm. A representative from Lanmei’s sales department told Caixin that the company has no cooperative agreement with Xingxing, has not authorized it to use its trademark, and has not supervised its manufacturing process. Lanmei has formed a legal team to follow up on the matter, the representative said.

Caixin interviews with officials showed how multiple government departments are accountable for different aspects of winter heating. According to a township government official, responsibility for clean-coal procurement falls at the county level, while localities are merely in charge of distribution. Governments at all levels from county downward are responsible for raising awareness of safety issues, the official said.

But at the local level, things get more complicated. An official at Yutian’s county-level bureau for agricultural and rural affairs told Caixin that the bureau only manages the promotion and sales records of the area’s clean coal, adding that the market supervision bureau takes responsibility for sourcing and quality control. Yutian’s market supervision bureau declined Caixin’s interview request.

A Yutian government official told Caixin they understood that the police were investigating the deaths. According to a county government notice, lower-level authorities are required to install ventilators in coal-burning rural households and recommend that they also fit carbon monoxide detectors.

Despite the suspicions, sales of Xingxing’s clean coal in Yutian have continued apace. On Dec. 10, a line of haulage trucks waited outside the entrance to the county’s clean coal supplier, Tangshan Xunchang Commercial Trading Co. Ltd. There, drivers told Caixin they transported coal products from Xingxing’s Gansu factory to locations across Yutian.

The heating switchover has caused a number of other headaches, too. Some poorer residents complained to Caixin that prices of gas-fired and electric heating are less affordable than coal. In one village, a man surnamed Wu told Caixin that since firing up his new gas heater on Nov. 17, he’d spent between 30 yuan and 40 yuan per day on fuel. If that rate continues, he may fork out a total of 4,000 yuan to stay warm this winter, compared to around 3,000 yuan when he burned coal. The average per capita rural income in Hebei last year was 12,881 yuan, according to a provincial government work report.

Families like Wu’s may feel the pinch even more from next year, when the Hebei government plans to slash subsidies by 50%. A further cut in 2021-22 will bring subsidies down to 25% of current levels before they end completely the following winter.

China Gas Holdings’ Deputy Chairman Zhu Weiwei told Caixin the restrictions were to shore up funds for the firm’s regional subsidiaries and were lifted after three to five days. Such problems were common during the winter heating season, when gas suppliers hike purchasing prices despite knowing that operators are banned from passing the extra costs onto consumers.